On a desolate world the MALP discovers a crashed spaceship and SG1 is sent to investigate. The ship is remarkably intact and contains hundreds of sleeper pods each with a human like being in suspended animation but someone or something is roaming the corridors with SG1 as their target and specifically Daniel. Upon returning to the SGC the humans of SG1 are medically checked out and Janet deals with a mentally damaged Daniel who seems to be manifesting a number of personalities. The fate of the crash surviviors and those souls trapped in the minds of Daniel and one other rests on the ability of Carter to jerry rig a system to power the ship and eventually revive the people with a promise to relocate them and maybe even find their destined planet which may at this time be the home of their people. 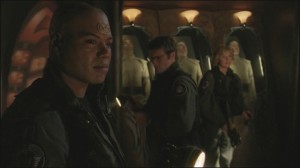 Lifeboat is an episode originally intended to be in season 6 but was also meant for Michael Shanks thus it was moved to season seven and allows Michael to do some serious acting both voice and mannerisms. Some of his work is based on emulating Ryan the young boy who played Keenin while his creations were the basis for the other actors when doing their roles. Whichever way the characters evolved Michael did a bang up job helped in part with the minimilist set design which focusues the viewier on the actors and their performances. 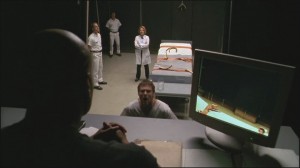 I’m not a number…

There are a few hurdles you need to jump to accept the episode, these people have advanced tech in some areas (Cryogenics and Computers) and have construction abilites to build deep space vessels but lack the FTL drives which we think would have gone hand in hand. Not to worry though the story is more about the people not the technology as shown by Teryl who gets a very meaty role in this episode and really lets rip at one point:)
Lifeboat isn’t a bad episode but it’s not a standout one either but for season 7 and it’s time restraints and budgets it’s far from the worse from the series. 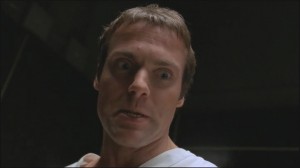 You forgot the lube doc!

Thanks for the feedback on last weeks episode it’s always a pleasure to hear what our listeners and fans of the franchise think about our shows and Stargate specifically so keep it coming.
This weeks promo is from Flash Pulp and next week we are covering the episode “Enemy Mine”.
Promo…