A return visit to Madrona to investigate some weather control technology reveals a world ravaged by extreme weather due to a device being stolen by humans who looked like members of the SGC. SG1 promise to find the Touchstone and they discover the second gate stored at Area51 is not all that it seems and in the shadows of corporate America and the political dark allies there are forces at play which could undermine the work of Stargate Command.

Touchstone is quite a pivotal episode as it lays the seeds of the shadow conspiracy and the NID involvement at certain levels. We see the very definite attitudes taken by the SGC in dealing with other races when compared to this mysterious operation and the fall out is covered in later episodes.

Serious respect to the cinematographer and set designers/artists for creating Madrona, it was a beautiful piece of work from the stunning lightning flashes to the sun shining on the new day. 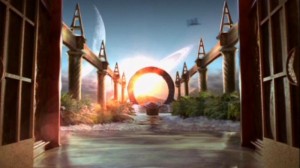