In The Prodigal we have John and Rodney having fun with their remote control cars only to be surprised by Teyla who is having a stroll around the city and trying to get her son to settle down. As they chat the power goes throughout the city yet there seems to be lights in the main control room. What John and company don’t know at that time is that a jumper has returned via the codes of one of the teams off world and then proceeded to stun everyone and then Michael and his hybrids emerge from the jumper. Teyla has returned to her quarters only to be captured and taken to Michael who as ever is intent on developing even more useful hybrids and is desperate to get Torren’s DNA and if Teyla comes along that all is peachy. Michael’s plan seemed sound but since the stun field left most of the cities personnel intact they soon begin to test the boundaries of the shield in an effort to counter attack. It becomes apparent that with the jumper supplying energy direct to the shield there will be no easy way to by pass it but Rodney is tasked to fix one of the jumpers in the underground bay and an unorthodox method of attack is devised. 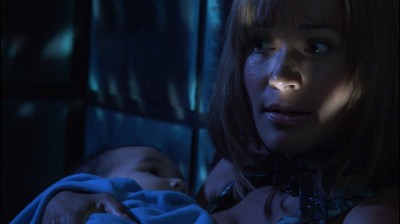 The Prodigal is an episode that had to be told, there was no way Michael was going to meet his demise when his cruiser was destroyed. In the classic style it would have to be an epic conclusion to his story and in terms of completing the circle it was Teyla herself that delivered the final blow albeit in a very cold and brutal way. The episode itself once again proves how adept the Stargate production team are at offering up crystal clear images of action that takes place in the dark and an emotive score adds to the atmosphere. It was also gratifying to see Sharon Taylor get to put her kick boxing skills to use and in turn raising the bar for Amelia, certainly opening up a position for another kick ass character and potential love interest for Ronon who has been mooning over Jennifer for too long:)

Thanks to Brad for joining us for this weeks episode and he’ll be back before we move onto Stargate Universe, speaking of which the episodes are being assigned so check the schedule and get your name down for a guest spot, we’d love to have you. If guesting on the podcast is not your thing than by all means we’d love to hear from you about Stargate and our discussions of the episode so don’t be shy. This weeks promo is for The Batcave Podcast and next week we are taking a look at Remnants with Ian.