SG1 are invited at the behest of Skaara to the new world of the Tollan to act as his “seekers” in a trial to determine if his body belongs to him or the Goauld Klorel who has controlled it for the past couple of years. Upon visiting Tollana via a gate the Tollan built themselves (yeah they are smart) they find the Goauld have sent a seeker as well but there are different agendas at play. 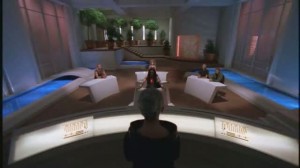 Once again the franchise is quite happy to build on the continuity by bringing back both individuals and races/worlds we have met before. In this case Narim of the Tollan and Lya of the Nox return and it’s interesting to note both are people from cultures far in advance of the Earth, mind you that’s the main reason they are still around with the Goauld knocking off weaker worlds. The big payoff of course is Skaara who was in the original movie finally getting into a position to reclaim his body something out of the question in the first season but as we learnt more about other races the knowledge that possession by a Goauld was not the end of the world has opened up many story lines.

Pretense is a good solid episode, I won’t say the court room drama is well written because it isn’t but then again perhaps it does reflect how it would play out between people and worlds so different. We also see a little groundwork laid for two future episodes although at the time we didn’t know it:)