A desperate call for help has Sam leading an investigation into the death of Dr Richard Flemming a former employee of Immunitech a concern with links to Adrian Conrad and may have had access to Goa’uld research. Finding evidence of a conspiracy a more indepth look into the town reveals some strange behaviour by the inhabitants and a startling discovery and double cross. 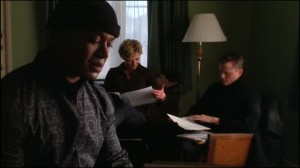 Nightwalkers is an unusal SG1 episode, it’s style is different to the bulk of the series and it’s also the first episode Richard Dean Anderson does not appear in which may have been the impetus to try something new. The direction and photography is reminiscent of the X-Files and includes homages to a number of offbeat shows and noir features and boasts some nice costuming and a strong guest cast. 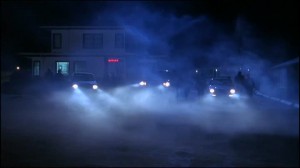 This can’t be good, pretend we’re not in.

The episode does offer up a fine supporting cast and ultimately it is rewarding even though it’s not high on any viewer popularity list but it starts the ball rolling on one of the pivotal events of the series which we will be covering at the appropriate time.