It looks like Daniel is finally free of Vala but after she leaves the SGC he collapses in a manly fashion and upon awakening Vala is once again by his side, it seems the effect of the bracelets has continued perhaps due to the influence of the communications stones. Thus begins a journey for what will become the new SG1 as they track down the man who Vala stole the bracelets from and he in turn agrees to help if they can return a necklace Vala stole, this leads them to a trader who wants a power coil in exchange and then a cargo ship for the coil and at each stage the “treasure hunt” gets more dangerous. 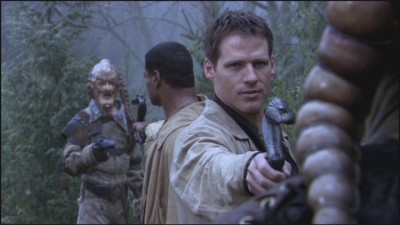 The Ties That Bind once again proves how well suited Daniel and Vala are in terms of a love/hate relationship even if the love part is always well buried, the chemistry between Michael and Claudia is well used and provides lots of humour and some drama with more to come. The adventure the soon to be SG1 embarks on is also full of it’s own humour and more importantly begins the Lucian Alliance aspect of Stargate be graphically showing that these guys are not some two bit operation, they have resources at their disposal and as mentioned lots of people looking for work and to make money in a galaxy with it’s former structure ripped apart. 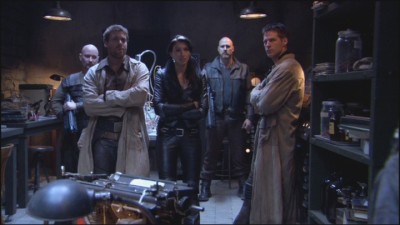 Vala and her boys

It was great to see Wallace Shawn appearing on the show playing the part of Arlos Kadawarn a former love interest of Vala complete with interpretive finger play which make everyone a little uncomfortable, he delivered some great dialogue and was perhaps the highlight of a very good episode. His performance takes nothing away from Bruce Gray, Malcolm Scott and Michael P. Northey who had wonderful supporting roles and played opposite Vala with style and how great was it to see the return of Jup and Tenat who once again come out of a deal with nothing and having to explain themselves to the Alliance.

Thanks to Brad for the voicemail this week and yes it’s week 3 of the competition, the question is in the show and once again it is an episode we’ve already covered so when you figure it out email us the answer. This weeks promo is from the guys at Pulp Audio Weekly and next week we say hello to Lt Cadman who makes her debut in the Atlantis episode “Duet”, Adam will be joining us for that show.