Atlantis is in a bit of a pickle thanks to McKay and some work on the Stargate which has left them without it’s use for a week now, it gets worse when some sort of probe/device smashes into the city in a smouldering ruin. Scans of the object are inconclusive but as Mckay and Zelenka investigate Rodney is sure he saw evidence of Replicator coding but Zelenka claims he saw nothing. Not long after the object destroys itself and with the laptop also destroyed their is no evidence of anything. John while training with Ronon gets injured and goes to the infirmary where Kellar proclaims there is no damage to his face and the blood must have been on the towel in the first place, John is suspicious and gets a full body scan which is negative and then requests a blood test just in case, Keller reluctantly agrees. This test is also clear but John knows something is wrong and Teyla and Ronon begin to share his feelings, the corner McKay in a lab and cut his hand, it heals itself and his amazement and shock is enough to convince them that whatever is going on they are not part of it and therefore can trust each other. They discover the main computer has no records for John’s scans and tests so they devise a plan to get John and Teyla to the infirmary to do another scan and while they are revealing that John is full of nanites Ronon and Rodney track down another lifeform which turns out to be Elizabeth Weir. At that point Keller and Lorne appear armed and reveal that Atlantis and everyone in it are a construct albeit John, Rodney, Ronon, Elizabeth and Teyla are biologic replications of their alternate selves created by nanites. It turns out that this faction of Asurans are still eager to ascend like their creators and have broken away from the main body of the replicator society but the experiment has failed and the forces of Oberoth have found them and warships begin firing on the city and the five human forms barely escape in a cloaked jumper.

They arrive on a world where an SG team have a base and ring home, the “original” team visit the world and meet their counterparts, McKay is absolutely delighted even more so when he learns of a piece of tech which can be used to track Asuran warships throughout the Pegasus galaxy but time is short and the two Asuran warships begin to fire on the location of the camp, one team flee via the jumper acting as a distraction while the other gates to Atlantis and learns exactly how many ships the Asurans have rampaging around the galaxy. 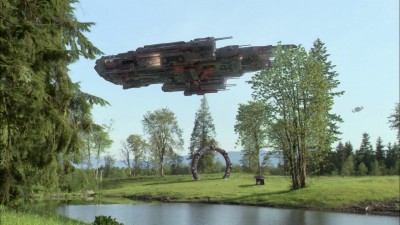 This Mortal Coil is the mid-season finale for the fourth season and in the grand tradition has a pretty solid cliffhanger which had the audience on the edge of their seat for the month or so between this and the second part of the two parter “Be All My Sins Remembered”. The twist that is hinted at pretty quickly is very satisfying and has ties to story arcs which began when the expedition first met the Asurans and maybe even further if you factor in the appeal to so many of ascension. Truth be told Keller played by Jewel Staite came across very strange, stunted delivery of lines which made sense when it was revealed she wasn’t the real Keller and the Asuran mimicking her only had limited information on her patterns of behaviour whereas other people in the city were more filled out and acted more like their other selves. It’s never going to get old to see Rodney get all excited about meeting someone as good as himself and well only a copy could ever measure up but this counterpart was even better than Rod from the other universe, happy as clams until the whole question of their futures were addressed by killing these copies off in a valiant and successful diversion. In many ways it was a very good episode and story for Elizabeth to make another appearance, some good scenes especially with John but alas only one more guest spot for Torri in the series.

Overall This Mortal Coil was an excellent episode of Stargate Atlantis and if anything the second part is even better which we’ll be covering next week so we hope you join us for that and feel free to let us know what you think of this episode and the show. You can find us on Facebook and Google + as well as Twitter (links upper right hand side of this website) and we are also carried on itunes and Stitcher Internet Radio, reviews and ratings are most welcome. This weeks promo is for Nutty Bites podcast, Nuchtchas is releasing a new show for each day of the month:)