A month after the events at Michael’s complex the new head of the expedition in Pegasus arrives via the Daedalus, Mr Richard Woolsey beams down and makes an awkward introduction, it doesn’t bode well. Dr Keller it sees is having some health issues and awakes at her desk to find her hand covered in goo but dismisses it, she is still looking into reviving Carson and when Woolsey is informed of her progress he simply states that at some point you’re going to have to gamble, her research pays off as Carson is unfrozen and the new drug injected into his system stabilizes it, things are looking up. The next morning Teyla is worried the no one has heard from Jennifer and when they access her room they find her in bed with some sort of alien growth covering part of her body. Carson tries to surgical remove it but it reacts and threatens the health of Jennifer so all they can do is attempt to divine its source as it looks like something Carson had seen Michael working with. 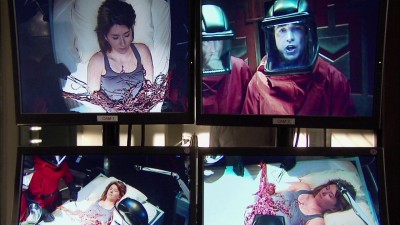 Things are going from bad to worse as this organic hybrid material spreads across her bedroom and buries itself into the structure of the city tapping into local power sources to increase its growth, as it approaches one of the main ZPM power conduites the question is posed in terms of sacrificing one for the benefit of all especially after Radek is attacked by a tentacle when investigating it’s growth in a support tunnel deep within the city. Carson identifies a virus in Jennifer’s system sourced from work undertaken by Michael however it does look like it was an accidental exposure and Carson has developed a counter agent but it has to be injected directly into her flesh and to get there someone has to get past the alien growth which they now know is a baby Hive ship.

Can Jennifer be saved, who will risk the gauntlet and has this been a good first week in the job for Mr Woolsey?

The Seed is considered (or so it seemed to me) to be a victim of some great episodes around it, in many ways it has the feel of an early season episode with a gimmick of the week and ultimately no real consequence but to be fair they are allowed to not hit the proverbial home room with every episode. For fans of Carson the episode pays off, a good example of his talents and commitment to his patients and of course John and Ronon get to do the hero thing, not demanding it has to be said but well produced as is the whole episode. The commentary on the DVD/Blu-ray goes into some of the issues with so much use of visual effects and practical elements for the alien growth and is well worth a listen and despite some negative opinions it was still a fun episode.

Thanks to Brad for joining us for this episode, we had some technical issues but didn’t lose any of the recording which is always the silver lining. We got some feedback over on our Facebook page so thanks to Brad and Steve for that. This weeks promo is for Generations Geek the father/daughter all things geek and genre podcast and next week we are taking a look at the third episode of the final season “Broken Ties”.