On a babysitting mission SG1 are captured by the Jaffa of the system lord Khonsu but two members of the science team decided to play hero and ring up to the orbiting Ha’tak and discover that SG1 do not want to be rescued, they are on a mission which requires an unorthodox means of communication. It turns out a Tok’ra undercover agent buried deep is searching out the source of Anubis’s technology and has information to pass on but who is playing who and have SG1 walked into a trap. 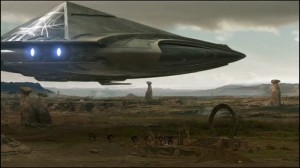 The Other Guys is an out and out comedic episode yet still has time to provide it with firm footing in the overall season arc. The two scientists (Felger and Coomb) played by Patrick McKenna and John Billingsley are wonderful comedy actors who not only excelled with the script they were given but we’re able to expand on the limits writers by design impose on their characters. While Abyss holds the lead in terms of drama there is no doubt this episode has the laughs and even though the events spin around the two scientists it doesn’t preclude SG1 from playing the “straight” men in the performance. 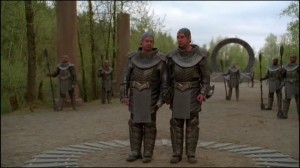 The Other Guys is an episode that you can cherry pick for someone new to the show and looking for a way in, it’s not typical but the humour fits right into the series as a whole, highly recommended episode and looks fantastic to boot and if you have the time have a listen to the DVD commentary with Peter DeLuise and Chris Judge.