Engaged in all out fire fight with some Jaffa SG1 beat a hasty retreat but Jack and Tyler are left behind unable to reach the gate. The rest of SG1 are desperate to return with more men but no one in the SGC admits to knowing who this Lt Tyler is and the question becomes who or what is going on. Until the truth can be discovered Jack is on his own which when you think about it is probably something he is well equipped to handle considering his background. 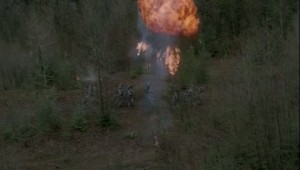 The Pyro guys had lots of fun

The Fifth Man follows a style that has been used often in Stargate with a very definite two story theme but with a strong link which keeps all the main cast members busy. Jack is in all out military mode which the rest of SG1 along with the SGC face the new political reality which comes from the character of Simmons who straddles military and civilian aspects. While both stories are strong it’s when the two merge we get an uber pyrotechnic and stunt filled episode which is a joy to behold whilst retaining some of the character and depth we are used to when SG1 meets new people. John De Lancie again is great as Simmons while Dion Johnstone usually seen under heavy prosthetics shines as Tyler proving once again Stargate does know how to cast it’s guest and supporting roles. 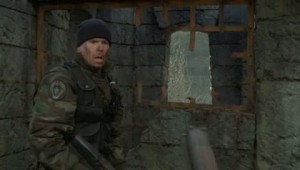 I’m sure I left SG1 around here somewhere..