The Ark Of Truth

After SG1 ended it’s television run MGM decided to invest in two straight to DVD movies, the first was The Ark Of Truth.

In this movie we learn that the Ancients long before they arrived in the Milky Way Galaxy had developed a weapon of sorts which would destroy the power base of the Ori in effect making them too weak to oppose them. It was however decided that taking away free will from millions of people was not a price the Ancients were willing to pay so they hide the Ark and left their home galaxy. Daniel and SG1 have found clues to its where abouts and are digging on Dakara when they are captured by Tomin and his men, the Prior orders their death despite their surrender and Tomin objects. The anti-prior device is working and the Prior gets killed, this combined with Tomin’s own doubts over his actions causes him to surrender to SG1 and return to the SGC. The IOA and SGC agree on a plan to visit the ORI galaxy and find the Ark and Marrick is sent along as the IOA representative, his past includes black op missions for the CIA so we know something is going to kick off. When Cameron puts his faith in the Ark and doesn’t immediately act upon the supergate Marrick uses the Asgard Core to replicate a replicator with advanced programming, of course it gets loose so the Odyssey has to fight off little pesky buggers as well as four very big pesky buggers in the guise of Ori starships. Meanwhile the team on the planet find the Ark and are then attacked, Teal’c is seriously wounded and his companions are captured and taken to Celestis where they are tortured and Adria reveals herself to be the recipient of all the power of the ORI faith. 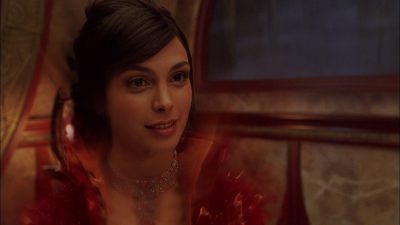 The Ark Of Truth had a larger budget than say a two part episode of Stargate SG1 and that is pretty evident from the word go however the majority of the story is shot on the existing stages and you can not really hide that fact. One other benefit of a higher budget and more time to play around with is the longer CGI sequences, seeing the Odyssey fly by or enter the stargate over a longer period of time adds so much to the feel and texture of the movie, not quite theatrical but so much more than tv. We also got some cameos and returning guest actors reprising their roles, again you can underestimate that aspect when making a serial show which relies on continuity to bring the fanbase into the fold.

There were some nice twists in the story although most of it had been hinted at in the final season of SG1 but it’s no surprise, this first movie was all about wrapping up the ORI storyline and it was always going to be a hail mary that achieved the almost impossible. It has to be said that the final product was very satisfying both in the story telling and the overall production and knowing Continuum is on the way makes the end of SG1 a little easier to accept.

Many thanks to Andrew for joining us in watching and chatting about The Ark Of Truth and he will return next week for Continuum in which Ba’al makes a return along with many other familiar faces in a final goodbye for this part of the franchise. We would love to hear from you on any Stargate or Gatecast related subject so don’t be shy.