The team explore what looks like an abandoned space station built within a small moon orbiting a devastated planet, Rodney of course can’t help but start pressing buttons and powering up the stations nuclear reactor. As the systems come alive he recognises an energy signature as belonging to the Wraith beaming device and they find a human looking individual who has been returned to physical form. Herick tells them the story of his world as it came under attack from the Wraith and this station was built to house and protect a few thousands people in storage until such time as they could return and rebuild their world but only one of the storage units is present. Jamus the leader of the project is awakened and explains that in the final hours the second shuttle never made it to the stations and Herick’s family perished, in his grief Herick commits suicide and cripples the station leaving it in a decaying orbit and now no jumper to escape either. 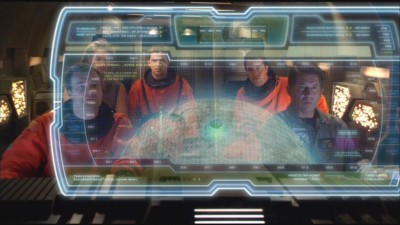 The Ark is another standalone episode near the end of a season which was strongly arc orientated but despite that works quite well even though you have to question the basic premise of the story and the decisions made by the people on this world. I can’t help but feel some deep underground havens would have been just as secure as an orbital hiding place for dozens maybe hundreds of these storage units for long term survival of the species and allow for more diversity. Oh well, we’ll never really know what ultimately becomes of the survivors but if the mixture isn’t 90% practical skills then no amount of art and poetry will prove the decision to obliterate their world was good let alone practical. The overall production based on pretty much two main sets worked very well, kept it claustrophobic and in your face but I don’t think any character really keep out looking good, even John’s choice to pilot the unpowered shuttle wasn’t a big deal since it should have smashed to pieces not matter how good a job he did. That said an easy to watch episode and The Ark is far from the worse of the season but not that memorable either but Kenneth Welsh did a fantastic job.

Thanks to Mack and Brad for the comments over on Google+ and Facebook, this weeks promo is for The Scifi Diner podcast and next week we are back with Stargate SG1 and the Teal’c centric episode Talion so buckle up for that:)