Welcome to my review of the fan fiction novel Stargate Aschen written by Kimberley Jackson.
There will be some spoilers but I don’t think there any that would ruin the book for you and well there are universal constants in literature which should offer
up no real surprises as to the direction of a story be it in novel form or screenplay. This review was first released on the podcast but not everyone listens to that and I know the website gets more visitors so here it is. 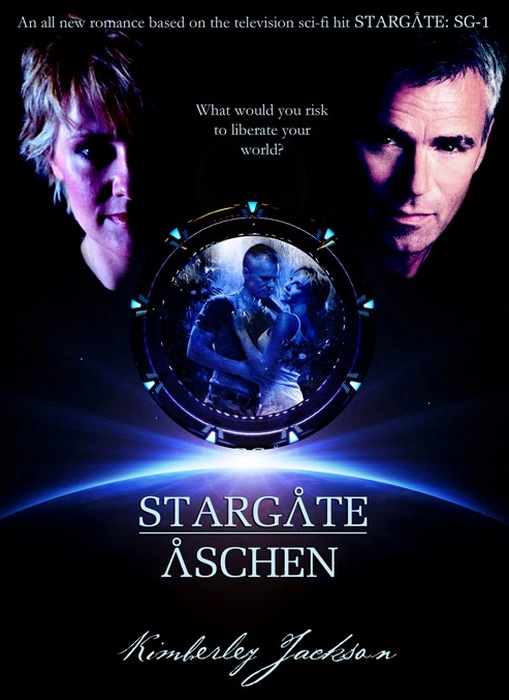 I’m sure you all remember the two Stargate SG1 episodes 2010 and 2001 which dealt with the Aschen civilisation, in a nut shell the Aschen take over whole planets and cultures by long term so called beneficial intervention but ultimately they manipulate fertility to reduce a worlds population then the remaining peoples are more or less farmers on a global scale to grow and export food to the Aschen homeworld.
As we know in the tv series the Aschen failed to make an impact on the primary reality of our Earth in the episode 2001 but in an alternate reality shown in 2010 they had a significant foothold and while they helped to defeat the Goa’uld the price the human race was paying was too high which then fed into the episode 2001 in which our SG1 meet the Aschen and are seriously tempted by their offer.

Kimberley has taken the core elements of the Aschen and set her novel in another reality or universe if you will, that gives the story a solid base and makes it easier for the readers to sync with the narrative but also allows for the characters to diverge from canon as and when required while still retaining the essence that made them what we came to love.

So the Aschen arrived on Earth in Egypt through the Stargate in the 13th century, they quickly took over and cull the population turning the Earth into a fertile garden with weather control technology and other devices. As the birth rate and population continued to decline over the centuries women were denied advanced education and slowly but surely taken from the workforce and were expected to be nothing but breeding machines.
In the year 799 (post aschen arrival) the unified culture of the Earth is pretty barbaric when it comes to those who are gifted with fertility, the men are given good jobs and rewards for fathering children with their mainly assigned wives and the women forced into marriage and breeding centers where forced conception is the norm. The only place on Earth you are likely to find a couple who are together for something as nebulous as love is amongst the infertile population who gain nothing from the current system and thus are free to choose who they spend their lives with. Sam Carter a 25 year old young woman is the daughter of a high ranking human official Jacob Carter, thanks to his resources and position he has been able to get Sam homeschooled unlike the vast majority of women but when her fertility test is positive they both now know her future is nothing but as a receptacle for the desires of a man and ultimately to be nothing but an incubator for the next generation of farmers. Unknown to Sam her father is part of the resistance and approaches his long term friend Jack O’Neill to take Sam as a wife (Jack is also gifted and is currently single), this would prevent Sam from being forced into the breeding centers and Jacob knows Jack would treat her right and worse case they would have two years before the Aschen authorities look to enforce the marriage contract in terms of producing offspring. Sam of course has turned into an intelligent and independent woman who gets a very brutal lesson in her position in the world, her Aschen boyfriend pretty much disowns her when he finds out she is gifted and the idea of being “sold off” to another man repulsors her and so determined to find and join the resistance she leaves the family home and ventures into the world.

That is pretty much how the story kicks off, we’ve already had many of the familiar characters and don’t let it worry you why these same people are here after the Aschen have twisted reality around and around for centuries, if you accept the multiverse then this variant is a given. It was also interesting to see how the culture had changed with the Aschen influence, humans live longer thanks to better medication and a cleaner environment but society wide the norm is not to have sex until your mid-twenties when the genetic screening begins looking primarily for fertility. In the non-gifted population there seems to be a more live and let live approach, sex is nothing since conception is impossible and the Aschen take a step back as long as the harvests are bountiful and associated endeavours are carried out, of course the gifted community are both the mouthpieces and primary line of control, too many of the men in positions of power seem to consider women are good for nothing but breeding and we also learn a significant number of women commit suicide when they find they are fertile, unfortunately drugs and restraints are used to force women to breed if they show decent, it is not a pleasant existence for those without power.

The human resistance began when the second stargate was found in the Antarctic, weather control had melted the ice caps bringing more farmland but also some areas which could not sustain farming yet were well away from Aschen interference. The gate was investigated and eventually the humans found that there were many destinations not just to Aschen and when they found a way to dial out and not interfere with the primary gate they began exploring the galaxy and found that the Aschen were a dominant species with the Goa’uld an annoying competitor, keeping their distance from both was the order of the day but slowly but surely advanced technology started to flow back to Earth. This is where Sam eventually ends up, a training camp for the resistance in the antarctic and the story takes it’s time to introduce more familiar characters as we follow her through her boot camp and this is where she develops her attraction to Jack who in a stunning coincidence is unaware this is the woman who Jacob married him off too, yes marriage for the gifted can be that cold in this world. Now Stargate Aschen is very much a novel that embraces the shipping opportunities that Stargate offered and the core relationship is between Sam and Jack although many many more are covered and while this is certainly not XXX rated it’s not for kiddies either, Kimberley treads a fine line in mature/explicit writing and for the most part lets the reader use their imagination and that ain’t difficult, I’ve always welcomed the Sam and Jack relationship but was pleased it never really went anywhere in the show proper.

I think I am going to leave it there, you’ve got the basics of the story and I think you can make an educated guess to how the plot is going to progress but you will have to read it to get the full flavour of all our favourite and not so favourite characters twisted a few degrees out of sync and there are surprises that make this an exceptional piece of Stargate storytelling and what’s more Kimberley is offering it free on the web and formatted for your ebook reader.

If you are still not convinced then seriously what have you got to lose, I had no hesitation in donating a few dollars to Kimberleys selected charity in thanks for her work on the novel it is that good and it’s a weighty tome but at no point did I consider the story slow or boring, when the characters work in a simple fan-fic or a more ambitious project or at least are close to what you expect from the canon interpretation then the pages will fly by and all the little and not so little references will have you smiling or even giggling in some cases, this is a novel for fans of Stargate, give it a go you won’t be disappointed.