The long range scans from Atlantis picks up a Hive ship stationary in deep space well away from any planets, the tracker embedded in Todd is pinging from the ship and as it shows no sign of movement a team is sent to investigate. While John and company are gearing up he puts his foot down with Teyla and clearly states that her pregnancy negates her going on this mission, he points out she may be the last of her people and she and her child can not be put at risk, she disagrees. Upon arrival the team discover a damaged Hive with dead Wraith onboard and the tracker lying in a pool of organic goo on the bridge fall, it had been torn out of Todd either by him or by who ever attacked the Hive ship. They seem quite pleased, while the Hive is damaged it’s not a write off and well Ronon said he didn’t touch anything but hey presto the intended destination of the Hive is on screen and indicates a highly classified Wraith complex. John after returning to Atlantis approaches Teyla and asks her to return to the Hive and use her talents to pilot the ship, she agrees and finds that her pregnancy seems to have increased her ability to merge her mind with the Hive control systems and the ship is much less stressful to fly. They arrive at the system where the complex is housed and find that a Hive ship is in orbit and the planet has a space gate, they take a cloaked jumper down (Teyla and Lorne stay onboard the Hive) and the team infiltrate the base and discover the usual creepy corridors and a number of birthing facilities. They also discover a huge chamber full of what look like cocoons or pods each holding a Wraith, McKay tells them that there may be over a hundred of these chambers in the complex meaning potentially thousands of Wraith. It turns out that Todd (who they find in a cell) had stolen a couple of ZPM’s from the Asuran homeworld during the battle and the complex needs ZPM energy levels to power this complex which uses a Queen to create a template Wraith off spring which is then cloned on a massive scale. Todd had planned all this but had been betrayed by one of his own who now serves the Queen in this base and before they can sabotage the complex they are stunned and imprisoned yet Todd manages to escape and make his way to the Hive with Teyla on board. The Queen interrogates the team and just before she feeds off Rodney her mind is taken over by Teyla using her enhanced mental strength to control a Wraith yet the mind battle goes on, a duel of wills which continues as the Queen releases the team and then just before she regains her being John empties his clip into her and they flee. They get to the Hive just in time for the other Hive to commence attacking but they can not leave without destroying the complex, they get into the jumper and send their Hive plummeting into the surface of the planet vaporising the complex. Todd once again lives to complicate matters another day and Teyla realises that she can not be act as if she only has to look after herself and teammates, she has a duty to her unborn which slightly alters her opinion on how John had treated her both as a friend and colleague. 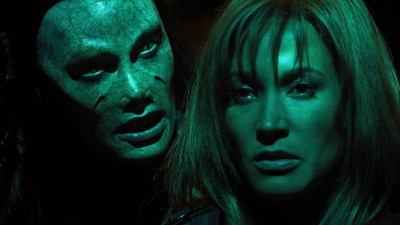 Spoils Of War is pretty much an unofficial third part of the mid-season two parter but then again this is serialised drama so it’s uncommon for episodes to be closely related just not quite this much. Not for the first time Todd is actually played by Brendan Penny and voiced by Christopher Heyerdahl and I’ll admit until doing the podcast that fact totally passed me by, in my defence first time around I wasn’t watching the show on a large tv or in HD and I was never big into forums and such like so a lot of trivia was passing me by. We got another Wraith Queen again played to perfection by Andee Frizzell who really got the malicious vibe on overdrive when she was confronting Teyla, that was perhaps more intense that her confrontation with John and Rodney. The sets and the visual effects were all good quality, not fall out from the high costs of recent episodes but it has to be said the Hive smashing into the planet could and should have been rendered to a much larger scale, this was a global killer not just a rather large boom. Mind you the look on the Wraith when he was told the Hive they were targeting was flying straight towards them was priceless:)

The episode is a very solid fourth season offering and it was good we got a little more balance to the Teyla situation, up to now it was all big bad John but as first Ronon gave her his support John had to admit he was perhaps a little too overprotective but on the flip side we did get to see Teyla also acknowledging her obligation to the child. All this had to be resolved as this aspect of the character and story is going to become very important as the season wraps and the fifth kicks off.

Many thanks to Jeff for joining us this week, we had a little technical hiccup about 9 minutes into the recording and I admit I panicked a little when I couldn’t find part of the recording but once I realised it had saved under a totally different naming format it all worked out ok. This weeks promo is for the SciFi Diner podcast and next week we are going to be talking about Quarantine which is a change of pace for the show, hope you join us for that and please let us know what you think, we want to know:)