On returning from a standard recon of an alien world SG1 have a piece of Ancient technology which at this point they have no idea what it actually does, probably one of the more stupid decisions made by the team. Immediately on return Jonas sees some sort of flying creture in the gate room but no one else can see it and the concern is that he has succumbed to the effects of long term Naquadria exposure. Of course with no sign of a foothold the SGC goes on as normal and Jack leaves to go fishing but then he too sees something that shouldn’t be there and the effect begins to spread within the mountain and beyond. 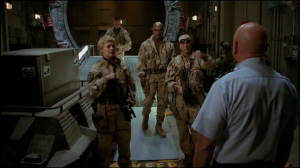 Sight Unseen is not a good story, it’s a little too simplistic lacking the drive and potential threat of so many other alien encounter episodes from the series. Ultimately while the effect of seeing these creatures will drastically change the way everyone lives their lives there is no direct threat and thus you are left with a feeling of so what. That said the production design and location work is right up there with any episode produced before or since and the guest stars Jody Racicot and Betty Linde are a hell of a lot of fun on screen. 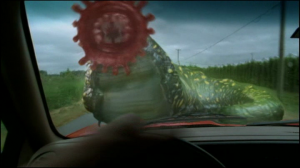 This weeks promo is from Flash Pulp a themed story cast which has been responsible for one new listener thanks to playing our promo and there is also a spot for Following the Nerd who were invloved with the recent Con that Alan attended.

Next weeks episode is Smoke & Mirrors which features the return of one of the classic human villians.