As the fleet of Wraith Hive ships and cruisers close on the Atlantis star system Rodney and two others take a jumper out to the Ancient satellite with the intent to repair the weapon and then spring a surprise on the Wraith when they enter the system. Rodney draws the short straw and has to don the space suit and re-route some energy conduits but the attempt is a success  and the satellite drawing power from a generator is armed and ready. Meanwhile back on Atlantis after failing to locate a suitable new Alpha site Bates is found seriously beaten, with their previous animosity Teyla is the prime suspect but after scanning the DNA remnants on the wounds Carson identifies that presence of a Wraith in the city and so the hunt begins. Bob the Wraith is captured and John interrogates him rather aggressively with no practical results as to why he sneaked into the city or his plans once the fleet arrives and arrive they do. Grodin is alone on the satellite and is successful in taking out the first hive ship but the fix fails and the weapon loses power leaving the other two hives to rip the satellite to pieces as Rodney and  Miller watch on from the cloaked jumper.

The Siege is a trilogy of episodes bridging the first and second seasons of Stargate Atlantis.

This is a big story and you can understand why a couple of the previous episodes were bottle shows, the amount of money spent on the sets and CGI would have been significant and while Part 1 isn’t all action there is enough flash and bangs to make you happy with a good bit of drama with Teyla and Bates and then Grodin. 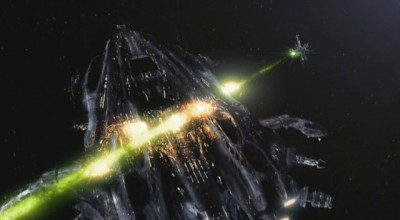 In all honesty when you watch part 1 you always have to ask yourself why is everyone so confident, it’s not as if full coverage of the star system with multiple weapon satellites prevented the fall of the city ten thousands year previously and while I suppose you could say it’s pure hope and maybe desperation but you do see much in the way of believable worry or trauma. Ok we get a little shock when the satellite is taken out and they lost Peter but Weir as a commander should takes it in her stride and it was good to see Rodney willing to go into the line of fire to attempt a rescue of his colleague. It’s also worth mentioning the use of sort of red shirts and the introduction of a new character who you would assume would be the sacrificial goat of the story, a nice twist. 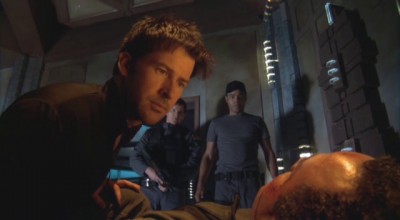 We got a nice discussion going over on the Facebook group for last weeks episode, plenty of back and forth on twitter and even a +1 and share over on G+ so that’s always rewarding but there can never be too much feedback and listener interaction so in that respect feel free to get in touch about our show or Stargate. We’ve put up the episode list for the next 10 months or so just to make it easier for anyone to find an episode they fancy joining us for and then it can be reserved and closer to the date a time can be arranged along with the bits and bobs required to make the recording possible:)

This weeks promo is from The Book Cave a resource dedicated to the more pulp side of literature, lots of author interviews, news and discussion so if like me you like that sorta thing pay them a visit.
Many thanks to Jeff for joining us for this episode and he’ll be back for part 2 next week. The following two weeks after that will be the domain of the two wrap up shows which include the results of the listener polls.