Samantha is invited by Warrick Finn to take part in a starship race hosted by a global corporation on the planet Hebridian, Warrick offers access to the ion engine systems of his ship the Sebrus in exchange for using a Naquadah reactor to boost it’s performance. Sam sees this as both an opportunity for techinical exchange but also a busmans holiday so while Jack and Daniel do a little diplomacy she enters the race with Tealc as her pit crew so to speak.
Space Race is a sequel to the earlier episode Forsaken (S6E18) in which the Sebrus acting as a prison ship crashed and it’s crew killed or replaced by the escaped prisioners and Stargate has always made use of existing characters to add depth and continuity to it’s shows. 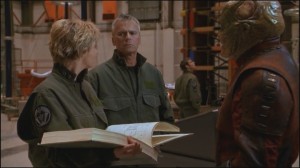 Credit must go as always to the actors who wear the heavy prosthectics and this time esepcially to Alex Zahara who takes over the role as Warrick from Dion Johnstone who was acting on the stage when the show came a calling. Patrick Currie who had previously played the replicator Fifth returns to the show as Eamon Finn a character who played well opposite Teal’c who once again took on his “Murray” persona. 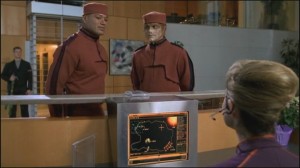 Space Race isn’t my favourite episode of the season but it’s fun and fast paced with a lot of money onscreen, it did turn out to be one of the most expensive episodes of the season thanks to it’s extensive CGI requirement and as always the graphics houses did the show proud with some excellent effects. 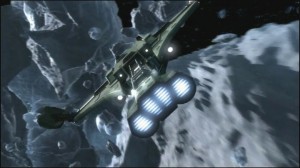 The promo this week is from The Scifi Diner and next weeks episode is Avenger 2.0 and many many thanks to Jeff who joined us this week over Skype from America to record Space Race.
We have both news and feedback segments this week as well as the upcoming birthdays, keep the feedback coming it’s cheers up no end and more news on itunes as we get it. 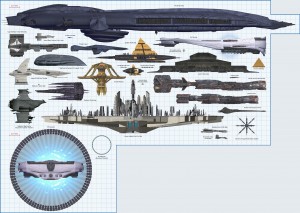