A pretty standard recon and science mission to a new world leads to the discovery of a crashed spaceship. While exploring the ship SG1 are approached by three human looking people armed and prepared to fight but then reveal themselves to be the crew of the ship. All seems well until the group come under energy weapon attack from humanoid/reptilian like aliens who are claimed to be stalking the survivors of the crash but despite SG1 fighting to defend themselves something is wrong and Jack is not quite sure exactly what. 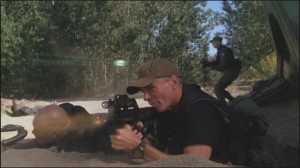 Forsaken is an average episode with some nice matt and location work and a very good set design for the space ship canted as it is at 30 desgrees, the prosthetics are top notch and while the alien weapons looks cheesy the CGI fire is stunning and helps to create one of the better fire fights in the series.
I found that the writers telegraphed the shady nature of the survivors of the “Sebrus” a little easily although with only 42 minutes you can not be too subtle and well Tanis certainly wasn’t  that when flirting with Jonas. An interesting titbit during the commentary is the fact that a sort of sequel to the episode was being worked out at the time of recording the audio commentary, we’ll see the ship again. 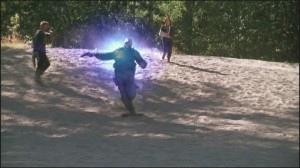 Thanks again for the feedback via Facebook and Twitter and a big thanks to Colin for the email. Next week we will be watching Changling an episode written by Christopher Judge and don’t forget to vote in the season 6 poll.