A close call for SG1 has Hammond considering his future and he retires from the military but is that the whole story? Jack pushes the issues and discovers the truth which leads him to the NID along with a former nemesis and now sidekick and together they delve into the murky shadow that has been hanging over the SGC for a while. 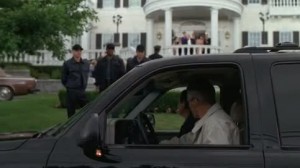 Chain Reaction is a continuation of the NID storyline which is a major force in the series at this time and brings in the wonderful guest stars of Tom McBeath and Ronny Cox both of who really shine in their roles. The Jack and Harry roadtrip in itself is funny but there confrontation with the senator and his wife & dog is priceless, the result though is a nudge for Kinsey to run for president which is explored in another episode.

The new commander of the SGU is General Bauer played by Lawrence Dane and while he gives us a solid performance the writing doesn’t really have the scope within the limits of a tv episode but it works and he nearly blows the mountain up within a week, Hammond took much longer:)

All in all it’s a decent episode but perhaps a little rushed but the humour and acting makes it well worth watching and you can never get enough of Harry let alone Kinsey.