Harry Maybourne pays Jack a visit at his home made more surprising because he is currently a wanted man with a charge of treason hanging over his head. Harry offers the gate address to the world Simmons stole the Prometheus to visit which he claims houses a cache of advanced weaponry and in return he wants a full pardon. It’s not that much of a shock the outgoing president agrees and Harry gets what he wants including a trip off world but it’s never that simple with Maybourne as we come to find out. 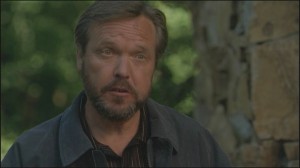 Paradise Lost is a well produced and very nice looking episode but it’s not exactly action packed or overly dramatic. It does however make it up for this with an excellent score which is used to add the needed depth to long periods when there is little or no conversation between Jack and Harry.
It’s got to be said the Tom and RDA have excellent chemistry when they are together and this was the driving force behind the creation of Paradise Lost and while it is a standalone episode you can take more out of it if you’ve seen Harry’s history with Jack. If you haven’t then you may be in trouble because the only other significant guest star in the episode is Bill Dow as Dr Lee, it really is a Jack/Harry study in an unusual friendship. 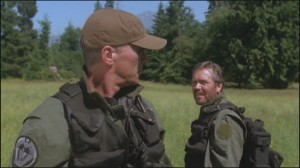 This weeks promo is from The Scifi Diner and next week we’ll be covering Metamorposis. As always thanks for the feedback and if you have anything to say about our show or the episodes we cover then get in touch via email, twitter, contact form, facebook of G+.
Promo…