SG1 are captured on a mission to the planet Juna by minions of Cronus but all is not as it seems but things start to become clear when one of them is threatened with execution and the SGC get an unexpected visitor someone Jack is not overly joyed to meet again. Naturally a rescue operation is mounted from the SGC with some reservations and on a tight schedule, the prisoners will be dead within the day even without Cronus himself getting his mits on them something he would really enjoy. 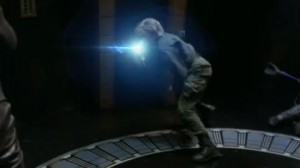 Sam gets all kick-ass!

This sort of episode is something SG1 does very well in terms of bringing back a character and story that’s not directly arc related but has proven to be popular with the fans. In this case Harlan and the alternate SG1 from Tin Man need help as they have been on missions doing pretty much the same as the sanctioned SG1 which is not surprising, they are to all intents and purposes the same.

What is interesting is that we see the aftermath of a SGC lead revolt on the planet Juna which left the people open to conquest by Cronus, just because Juna had no real resources the Goauld wanted didn’t mean the world was of no interest in terms of the galactic power struggle or as a simple source of subjects for a System Lord. The episode has lots of action, some good humour and is a technical achievement with the amount of multiple characters on screen despite the limitations and cost of the technology at the time. It’s also a milestone in Michael Shanks career as he directs his first SG1 episode, nothing like jumping in at the deep end, there were technically simpler episodes this season:) 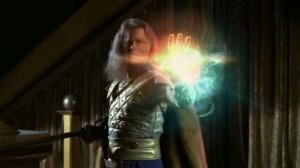