The tenth and final season of Stargate SG1 begins with the aftermath of the disaster at the Super Stargate when the four ORI starships entered the Milky Way galaxy and wrecked havoc amongst the combined Earth, Asgard, Lucian Alliance and Jaffa fleets. Daniel finds himself trapped onboard an ORI ship luckily it’s the one with Vala onboard but also her husband and child, yes Adria is here and quickly going through the younger actresses before we eventually get her in her full glory later in the season. As the ORI fleet invade Chulak wiping out the orbital defence it’s Bra’tac who comes up with plan and by plan a last ditch effort to destroy at least one of the ORI after the weakness in their shields proved to be insignificant for a tactical advantage. Thankfully Cameron is looking at the bigger picture although obviously if this was Earth he may have been the one to embark on a suicide mission but many will live to fight another day and maybe just maybe a solution to fighting the power of the ORI channeled into starships and weapons will be found. 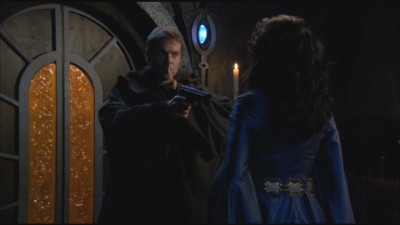 Daniel, so tempted no one would know.

Flesh And Blood was an excellent season opener building on the very impressive season nine finale and introducing a genuine focal point for the season to concentrate on, having a character that represented the threat rather than multiple priors makes a lot more sense and of course good writing to take advantage of Claudia’s pregnancy at the end of the last season and exploit it in a good way. Once again Chulak feels the wrath of the bad guys although once you get the reputation of being a seat of rebellion and independence so then any conqueror is going to take notice:) Stunning CGI space battles which are  imaginative and compelling and there is some genuinely creative set design for the ORI ship marrying old and new styles as shown in the living conditions the ORI keep their worshippers in so lots of precedent and kudos to the three young actresses who played Adria in this episode, they all brought something to the part and gave Claudia a lot to work with which we all benefitted from.

Many thanks to Thomas for joining us for the season opener, he will be returning later in the season and thanks to Dan and Elisa for taking the time to send us emails, appreciated to a degree we can not express:)

This weeks promo is for SciFi Diner and next week we begin the third season of Atlantis with the episode “No Man’s Land” which Brad will be joining us for so stick around and don’t forget to let us know what you think of the show and if you have the time an itunes rating/review would be most welcome but more importantly enjoy Stargate and lets all keep the franchise alive and flourishing:)