In the episode Faith we see the Destiny drop out of FTL in a star system with a single planet that had not been charted by any of the seed ships which had passed through their part of the galaxy. Rush investigates and determines that this star and planet where simply not there when the seeders were looking to place Stargate and the scans of the system simply make no sense in terms of the age of the star and the planet’s structure and ecosystem. However Destiny will be in the system for at least a month as it orbits the star so the shuttle is sent down along with a full compliment of volunteers who set up camp and proceed to live the life of hunter/gathers. TJ goes along and realising now she is well into her pregnancy makes the most of the fresh air and water and good local food to revitalise her soul, many in the camp follow suit. 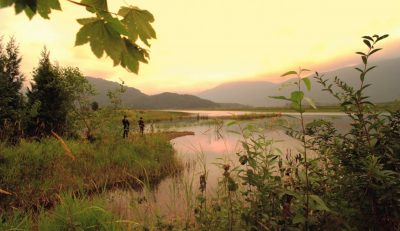 On Destiny the remaining crew take the time to do some maintenance and explore the ship further, they find a few things that may come in useful at a later date but overall a depression has set in thanks to the daily grind and as the ship gets nowhere rather slowly. Of course not everyone had the opportunity to visit the planet but with gate travel limited perhaps many people still have not physically left the shop since they arrived. As the days go by and the camp prospers many begin to question the existence of the planet and the strange tower, perhaps the planet was created by an advanced species for purposes unknown or as Dr. Caine mentions perhaps it’s a gift from god. When their time on the planet draws to a close Young is rather startled to hear that not everyone wants to come back, mostly the group consists of the civilians but Scott and TJ want to stay, this does not go down well with the Colonel. Taking the partially repaired second shuttle he makes planetall and offers a deal, if all the military return he will leave that shuttle (shelter, power and limited flight) for the civilians and wish them well. TJ is heartbroken but a realist and returns forcing Scott to follow suit and the primary shuttle returns to Destiny with less people than before but packed with food and water.

Faith is beautiful looking episode making full use of the location shooting, some of the visuals are truly awe inspiring including the “night” shooting which was actually done during the day and making use of post production to create a truly believable night scape. The discussions between all the characters on the planet be it about TJ and her pregnancy and the existence of the plant and the tower be it from god or another species showed how good the writing was in the show and the chemistry between both regular and guest actors. There are many questions asked in this episode and they tend to be ones with no direct answer, certainly this planet will remain a bit of a mystery for a while as such things should be although I am sure it’s existence may have been addressed if Universe had been on the air longer than it was.

Our thanks to Steve for joining us for this episode of the podcast and for bringing great insights into the story, he will be back. This weeks promo is for the Flash Pulp podcast and next week we will be taking a look at the episode Human with one of our long term guest hosts Thomas, hope you join us for that and we would be delighted to hear from you.