A game of hide and seek by a couple of the youngsters in the city leads to the release of an energy based entity which feeds on the power sources of the city and even the energy generated by living beings. McKay as he is finds a new toy which leads to all sorts of bother as he once again leaps before looking but long term it pays off via an unexpected show of courage on his part.

Hide And Seek is an interesting episode to have after the uber feature premiere, it perhaps reflects the average budget of an episode of Atlantis as well as providing both the story and the viewers with an idea of how truly vast the city is and how long it will take to explore let alone understand everything that the Ancients left behind. We get some great moments between Sheppard and McKay as well as discovering the fact that having a large civilian population isn’t really going to work both for the city and the series itself.

To be honest there isn’t a lot to say about this episode, it’s a typical scifi season 1 effort neither good nor really bad just there but they have already got the humour down pat which will pay off through out the five years of the show.

We’ve had our itunes competition draw and the winner was Dan LaRock, he’ll be receiving his Ronon figure courtesy of the US postal service. We have a bit of feedback in this weeks episode as well upcoming birthdays and a little news, we can never get too much feedback that’s a fact:)

This weeks promo is from our friend Nuchtchas and her podcast Nutty Bites and next week we are back at the SGC with the SG1 episode “Zero Hour”, join us and let us know what you think.

The SGC send a MALP to a world believed to be linked closely to the Ancients but once it arrives the device is taken over and seems to fly towards it’s destruction. During this transit data is flowing back into the SGC computers and then all hell breaks loose as an entity makes itself known within the very infrastructure of the bases electronic heart. Entity is pretty much a standalone episode almost a bottle episode which relies on the existing sets and regular cast, not always a bad thing but in this case not the best episode of the season despite some excellent cinematography using a HD video cam system for the first time.

Now if you haven’t seen this episode give it a go, it’s not bad just not that original since it seems some basic stories are done by every genre series at some point and it’s SG1’s turn to do the possessed technological entity routine with all the implications to the host and their friends that brings. 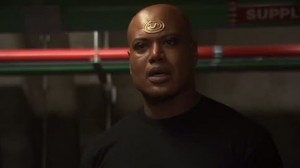