Enemy At The Gate

In the Stargate Atlantis series finale Enemy At The Gate the consequences of the reality breaking signal as seen in the episode Vegas is felt as a Hive ship in “our” reality receives the information. This may not have been too bad but unfortunately an underling of Todd has secured a ZPM and created a Hive that is vastly more powerful than any before it. It is bigger and faster with every subsystem improved, the only upside is that only its sensors were good enough to pick up the signal and the Wraith commanding has no wish to share the location of this new feeding ground. John gates back to Earth to help defend the planet using the Ancient chair and Atlantis is forced to give chase thanks to Todd providing them with his stick pile of ZPM’s. The Hive gets to Earth very quickly and destroys Area 51 which by bad fortune houses the recently relocated Chair but thanks to one of these plot (rabbit out of the hat) points Zelenka gets the wormhole drive to work and Atlantis appears in orbit just in time to intervene, the battle is joined. John in a nuclear equipped 302 gains access to the Hive but is very surprised to find his team already there thanks to the quirk of having two gates in close proximity, together they attempt to fight there way out but time is running out as it and Atlantis trade blows above the Earth. 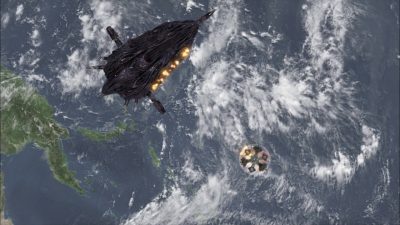 Enemy At The Gate is a good episode of Stargate Atlantis and for the most part is not a bad season finale however it is not a good series finale, the story was rushed and plot issues not really addressed, maybe if the TV movies had been made they would have taken the sting out of being left with that final scene but we’ll never know. That said the production value of the episode is excellent, there is some stunning visual effects and full use is made of the standing Hive sets which have never looked better but there were still stories to be told and that will forever colour opinion on this episode.

Many thanks to Thomas for joining us for the final episode of Atlantis, he’ll return for a few episodes of Stargate Universe. Thank to everyone that left the feedback for Vegas and other things, always appreciated. This weeks promo is for the Legends of S.H.I.E.L.D. podcast and next week we are going to be taking a look back at the final season of Atlantis in the wrap up show and announce the results of the listener poll.