Teyla takes Dr. Keller along with her for both a social and professional visit to the Athosian settlement but when they arrive there are no people around and signs of carnage and struggle but no bodies. Teyla spots members of the Bola Kai in woods and evades them, it seems this nomadic war like tribe are feared throughout the low tech settlements but their is a question mark over their involvement in the missing people since they are not carrying the Earth provided weapons the Athosians were using for defence. They find an injured man (Nabel Golan) who claims to be a Genii intelligence agent gathering intel on the Athosians but Teyla is unconvinced however Keller is adamant in treating the man until of course they get captured and not surprisingly he gets away. The Bola Kai chief Omal (Danny Trejo) questions the two women and concentrates on the much weaker and inexperienced Keller who cleverly gives a false gate address and she is returned to her cage and when the tribe run off to interception some people (John and friends) coming through the gate Nabel arrives, kills the guards and releases the women. The tables are now turned though and since he is armed he takes Teyla down and demands the gate address to Atlantis but after being jumped by Teyla it’s left to Keeler now armed to put him down, well she shoots him in the leg and now a prisoner he confesses all but still a question over the Athosians. A running battle breaks out between the expedition members and the Bola Kai but with superior weapons they drive the tribe off and then return to Atlantis where Teyla is given the news or maybe confirming
what she suspected that she was pregnant and the father along with the rest of her people is missing. 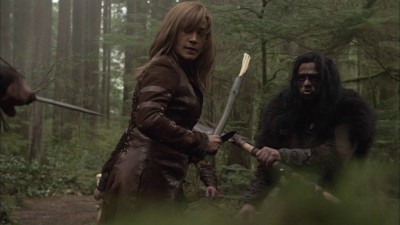 Missing is an episode that was required to set Teyla on a new course which will play out throughout the rest of this fourth season and it also allowed the writers to give us some more depth to Dr Jennifer Keller who wasn’t really prepared for the demands of field work in another galaxy but came through with pretty much flying colours. We know that location shooting is getting ever more difficult so it was godsend to get access to a protected national park although as the commentary said there were restrictions but nothing quite works as well as having a real rope bridge built to film on, no green screen required just good solid stunt work from the two women who doubled for Rachel and Jewel. Overall a very atmospheric and action orientated episode which lays a lot of groundwork and of course the strange tentacled like creature that burrows around:)

Once again our downloads are holding up much better than they normally do when the summer months come around so thankyou to everyone that is listening and still some episodes that could do with a guest host, don’t be sky. This weeks promo is for The Sci-Fi Movie Podcast and next week we are going to be watching Seer which has yet to be recorded, fun times.