While exploring a new world the jumper lands at a small encampment where quite quickly the team are fired upon by primitive weapons, an aircraft arrives and gives aid and the team follow the aircraft to it’s base and a meet a fairly advanced society. Upon returning to the gate the jumper is fired upon once again and sustains damage and the team even with Ronon along are taken captive by the prisoners who inhabit the small island that contains the Stargate. Rodney is then encouraged to fix the jumper or one of his friends will be executed but that’s beyond even his talents however he is with some prodding able to enable the dialing computer.
Meanwhile Weir and her escort arrive on the world and open negotiations but the lack of results in recovering John and his team and the suspicious behavior of the Magistrate and the revelation that the prisoners some guilty of very minor crimes are going to be fed to the Wraith breaks down the talks and Weir and her team leave the city. Everything comes to a head when Wraith cruisers arrive above the island and the crippled jumper launches a drone which causes extensive damage and while a second fires on the island Weirs cloaked jumper dials the gate and allows John, Ronon, McKay and Teyla to escape. 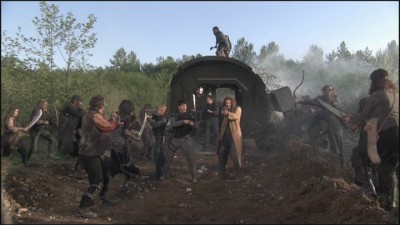 We may have a problem

Condemned is an interesting episode and explores a solution to the Wraith problem which is unique at least in terms of a society making this decision and keeping it working for generations. Of course the supply of hardened criminals will dry up if the deterrent is that strong so as minor criminals are sentenced to the island the society itself becomes driven by compliance and obedience to dogma rather than a free thinking and living world. The island itself is now very much a dog eat dog entity, those sent there that are truly violent easily become dominant but it’s hard to see how they really got so well armed with limited resources but if they failed to bring down a jumper then that would be the story over very quickly.
The episode was wonderfully shot though, the island location looked very nice and different to a lot of what we’ve seen before and the stunt work for the fighting was exception again seeing Ronon let loose really dispels a myth that a big man can not be lightning fast and versatile in his fighting technique. It was also a show piece for Teyla as Rachel has perfected her action performance and it was only really John who was the comic relief but done so well with the stick and his knee. Again we see evidence that Rodney despite a huge streak of self interest does consider his companions more than worthy of his commitment and maybe even sacrifice, as Torrell says the way to motivate him is to threaten his friends. 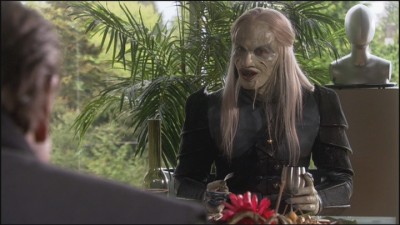 Look who is is coming for dinner

Alas the end result is just an average episode despite the performances and production, that says more of the strength of the show and it’s second season rather than the story by Sean Carley and script by Carl Binder or the direction from Peter DeLuise. This weeks promo is from Trek News & Views a Star Trek podcast from our friend Colin and part of the Trek.fm network of shows, next week we will be back at Stargate Command and dealing with the Ori as they make their first major move in the episode Beachhead, hope you join us for that. If you want to get in touch with us or leave us a rating/review on itunes or stitcher we would be very grateful, till next week and watch that final step.