A science mission on P3X-888 believed to be a homeworld of the Goauld thanks a fossil record being unearthed is well under way when the camp is attacked and Daniel abducted. SG1 along with another unit ride to the rescue and we see the episode branch into two parts as Daniel and his captor interact and the SG teams search for him while making the discovery that symbiotes are in the wild and any one of them could be now be a Goauld, except for Tealc of course.

An interesting episode which builds on the overall arc as it deals with the Unas, the first sentient hosts of the Goauld. Daniels super linguistic prowess comes to the fore as he learns in a small way to communicate with the Unas that captured him and the “b” plot search and rescue is done very well with action and humour. We have the return of  Dr Rothman as well as Major Coburn plus Dion Johnstone this time under all the latex makes yet another visit to the franchise.

This episode was very atmospheric in other words a lot of scenes with no dialogue relying on the soundtrack and music cues to add texture to the visuals, not easy to comment on:) 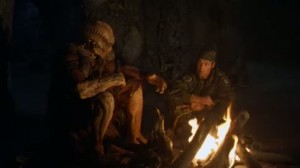