Nerus who is reputed to be the intelligence behind the technical achievements of Baal offers his services to the SGC to aid in the repulsion of the Ori who have taken a Jaffa world and are using it’s Stargate for as yet purposes unknown. Nerus convinces the SGC that the gate is going to be a beachhead into the Milky Way for a full scale invasion rather than the odd Prior here and there so the Prometheus is sent armed with a Mark 9 Naquadria enhanced nuclear weapon aka Gate Buster. What amounts to SG1 beam down to the planet and address the Prior hoping for a peaceful solution but then Gerak and the Jaffa fleet arrive and open up on the planet from Orbit and faced with no peaceful solution the bomb is armed and they beam out. Upon detonation the energy shield surrounding the gate expands to cover the entire planet and then the light bulb flickers into light and Sam realises that the Ori needed the extra energy and Nerus had been in cahoots with the Ori. Things really take a turn for the worse when the planet starts to shrink and once again Sam figures out that this super stargate being built will be powered by mini black holes one at either end. In the panic that follows only Vala comes up with a solution and risks her life to prevent the completion of the gate and when it’s destroyed no trace of her can be found.

Beachhead is an excellent episode of SG1, it not only offers up a very good story but backs it up with some good stunt set pieces and outstanding CGI work both on the planet and in space, the studio work doesn’t let the episode down either and all parties bring their “A” game. It was a nice twist to find out that Ba’al isn’t the mastermind he implies to be, it does make sense that there are Gou’ald who like human scientists do all the hard work  but are not in command. It also makes sense that he would come to Earth looking for sanctuary, the SGC have proven to be a major player in the galaxy but the twist also proves perfectly reasonable. Nerus like all Gou’ald is arrogant and power mad, believing he could use the Ori is as a conduit to his own rise in status does explain his actions and of course the character is played wonderfully by Maury Chaykin (1949–2010). 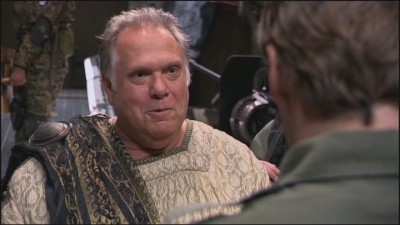 You can trust me

We finally see Sam back at the SGC full time and we even get a unheard phone conversation with Jack which was funny and well any reference is a good reference. This episode also spells the end of Vala’s arc during this part of the story and she went out saving the Prometheus the ship she stole not so long back and in doing so pretty much left everyone feeling maybe just a little guilty. It is a little disappointing because the basketball scene we get early on really does show how well the team have meshed with laughter and casual ribbing of each other. 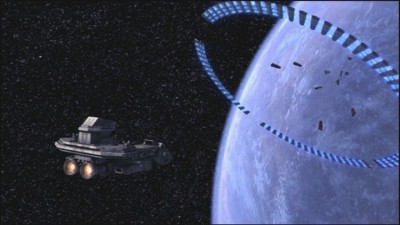 Beachhead is an excellent standalone episode as well as a starting and ending point for a number of story arcs, it really does shine as being a standard bearer for what Stargate is all about both in story telling and production, design and values. This weeks podcast promo is for Tuning Into Scifi TV and next week we pay a visit to Pegasus for the Atlantis episode Trinity in which Rodney lets his ego lead him around like a little puppy with disastrous consequences. We would love to hear from you about anything Stargate and we’re always on the look out for a guest to join us for an episode of SG1 or Atlantis, itunes and stitcher ratings/reviews are most welcome and if nothing else enjoy the show and tell a friend:)