SG1 are on board Prometheus for it’s shakedown cruise when a flaw in it’s energy buffer causes the hyperdrive to disengage but Jonas and the navigator save the day when he locates a world within a short jump which has a stargate. On arrival the drive fails and causes the ejection of the core which explodes and provokes a missile attack from the planet they are now orbiting but with smooth & pleading diplomacy Jack convinces the world they are not a threat just a nuisance. 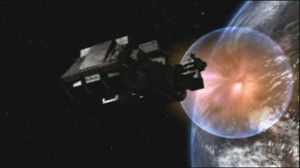 Memento once again makes full use of the Prometheus set and now fully operational it really does look different especially with the various lighting levels. The ship also has a active ring transporter complete with nicked control panels and interfaced with English symbols/writing.
We don’t see her weapons but the Asgard shielding certainly works but it’s hard to imagine such a vessel being atmosphere capable, that I guess is for generations to come to figure out:)
The people of Tagrea are a mixed bunch even with the small sample but it serves the story with the visionary leader, a conservative military guy and the dreamer who means well but doesn’t quite have all the facts.
Robert Foxworth a seasoned TV actor and capable genre performer is excellent in his role and would have made a very satisfying recurring character if the series has explores Tagrea in later episodes. 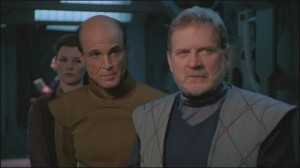 The final product is a solid episode with some humour and drama but may be remembered for the homage to the movie in which we see a Stargate being uncovered in the desert and the with pulleys and winches erected whilst the
sun shines down. This scene was beautifully shot scene and one of Rob C Coopers indulgences. 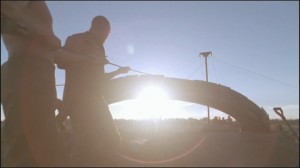 An electric winch is cheating.

Next week we’ll be covering the episode “Prophecy” and this weeks promo came from the Treks in Scifi podcast. As always we welcome any feedback in any form so stay in touch and join us next week.