The virtual reality chair from the planet of the Gamekeeper has been developed to provide a total immersion combat simulator for SGC personnel but when given to Tealc to test he is unimpressed, it’s all too easy to defeat so it is back to the drawing board and the programme is tweaked and it becomes all too real to such an extent that the computer believes he would never surrender and thus he can never leave the game until all the enemies are defeated.

Yes we’ve all had games like that, they get deleted pretty quickly.

We’ve got to say that the stunt teams, pyro and weapon masters really went to town in this episode, the action is fast and furious with everything looking spectacular, no short changing with CGI bullets etc in this show. Teal’c motivations and inner doubts are exploited and examined which does beg the question when he truly believed that the Jaffa could over come their Lords, quite late in the game it seems at least according to the computer when keeps racking up the bad guys with Kull, Gou’ald and even mixing in cloaking tech and infiltration. It’s also entertaining to see Teal’c getting killed in many many ways but also the rest of SG1 and the SGC getting mowed down sometimes very cheaply. Bill Dow had a good role in the episode as the harried Dr Lee and a good guest spot for Andrew Airlie playing a specialist brought in to over see Teal’c as his mind and body are put through the shredder. 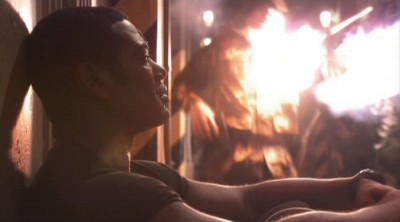 Some days you should have stayed in bed. 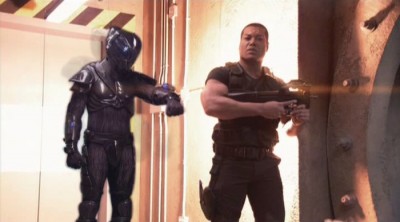 We did have some audio issues this week, the raw wav file was missing some of it’s left channel which meant filling gaps with a lower quality mp3 and new audio, hope it’s not too bad for you all.

This weeks promo is from Flash Pulp a podcast responsible for original audio drama published multiple times per week with a very healthy online community and next week we return to Atlantis for the episode “Childhoods End”. If you want to get in touch with us then we have a presence on Facebook, Google+ and Twitter as well as this dedicated website and listings on Stitcher and Itunes plus the good old fashioned email which Brad once again made use of to send us some voice mail.