Far Horizons is a compilation of ten short stories set within the Stargate SG1 and Atlantis worlds from authors well known within the genre, the book was published by Fandemonium / Stargate Novels with the ebook released on the 23rd of October and the paperback on November the 8th. This review is just going to brush the surface of the the ten stories since I don’t want to spoil anything and while many people are not interested in sitting down and reading a full novel these ten stories are an ideal length in terms of content to equate to episodes and we’re all happy to watch an episode. 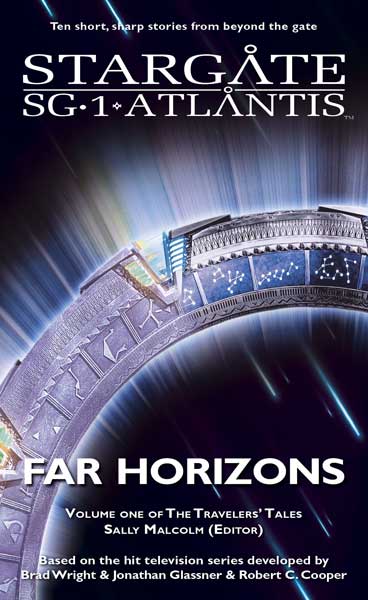 Draw Down the Moon by Suzanne Wood

In Draw Down the Moon SG1 are assigned for a follow up mission to the planet designated P3X-228, they return to the world to take up an open invitation from one of the communities elders to return for their festival but they are also seeking out a source of some energy readings which indicate the use of high technology. As the energy source continues to elude SG1 their conversations with the locals and the purpose of the festival raise some questions, enigmatic meetings with a number of women add to the increase in tension as the festival nears, are these people in danger, are they more than they seem and are SG1 all alone on this world facing the unknown yet again…

Who doesn’t love a mystery and the conversations that mystify SG1 yet open their minds to possibilities.

The planet M3T-211 is a nightmare, a world shrouded with a particle field which will block sensors making it an ideal off world facility IF the members of the teams could actually operate under a sky which provokes nausea and illness. Sheppard and his team along with a science contingent are surprised to find a young girl on the island which holds the Stargate and then a small community who are aware of the “portal” but seem to have a healthy fear/nervousness about mainlanders and sea folk and indications of Wraith presence are found on the island. A festival is approaching and while the locals seem friendly it’s evident they are hiding something but should the people from Atlantis interfere without knowing all the facts.

A dark story which highlights the pitfalls of interfering with a society.

When On Earth by Sabine C. Bauer

The first Jaffa to visit the SGC in peace, his name is Teal’c and he’s thrown away everything he has achieved in his time as a warrior of the System Lord Apophis to follow a single man whose words gave him hope that maybe his people and his brothers across the galaxy may one day be free. Take a look at the SGC and it’s air force personnel through the eyes of an alien as he has to adjust and accept a new reality, potential friendships, allies and maybe a renewed determination that his choice was the right one.

What would it be like to be alone amongst aliens, Teal’c the man the legend.

A salvage mission of an Ancient warship is ongoing and Ronon has been volunterred if for no other reason than to keep him busy and not brooding over a failed potential romance with Dr Keeler, the fact she seems to like Dr McKay isn’t helping but work will take his mind off it his friends are sure. A distress call from a Traveller ship has the puddle jumper fly off leaving Zelenka and Ronon to continue their work but structural stresses in the hull of the ship being to tear it apart and with time running out they search for away to escape the dying ship with no help at hand.

Zelenka is a great character and teaming him up with Ronon well that’s a winner.

After a narrow escape from the dying Asgard starship Biliskner Jack, Sam and Teal’c with Thor in statis arrive on a world formerly surveyed by the SGC but it’s not quite as reported, the landscape is changed but with no recourse they set out to find Thor’s pod which had arrived a little earlier than the humans but then Teal’c vanishes. Sam finds his weapons and when turns back finds O’Neill frozen in place with some sort of energy field between them, alone she sets out to find her missing friends knowing she can no do anything for Jack and the consequences of her decisions and actions were reverberate around this world for generations to come.

The mystery of the Soul Patch and a tale untold.

The majority of the Ancients have died or fled the Pegasus galaxy but their progeny known as the Asurans are still fighting against the dominant life form in the galaxy known as the Wraith. Onboard one hive ship the political and social power play amongst the males for the favour of their queen results in an audacious plan to strike at the heart of the Asurans and turn the tide of the battle, this is the story of this hive and one wraith in particular.

An insight into the Wraith, not just a generic bad guy.

SG1 still suffering from the loss of their close friend and colleague Janet Fraiser undertake a mission to strike a super soldier facility but they become pinned down and flee the planet in a stolen cargo ship controlled by a symbiote who claims to be a captured Tok’ra whose host has fallen. As each member of SG1 deals with their grief over Janet and failure to gel as the team they once were they are forced to confront themselves and their feelings with each other, the imprisoned Tok’ra Penthos adds an extra dimension to the dynamic especially with Jack with his existing issues with both symbiotes and the Tok’ra.

Crosswords and character interaction with a depth which was missing despite the excellent Heroes which dealt with Janet’s loss.

Colonel Samantha Carter commanding officer of the Daedalus class starship the George Hammond once again runs across the mysterious starship they waylaid the Prometheus so many years before. This time with no head wound to confuse the issue these projections/entities or figments of her imagination can be more directly questioned revealing much more of this enigmatic but so very powerful starship which despite being aggressive had dealt honourably with her when she had saved both ships during their previous encounter. Who are they and what do they want?

Good ol’ George and Samantha front and center proving what we already know.

Off Balance by Sally Malcolm

Jack O’Neill is recruited by agents acting for the Air Force and the SGC to help in the rescue attempt of SG1 thanks to his genetic gift of the ancient gene, his mission will be to activate a piece of alien technology on an off world compound where SG1 are being detained but not everything is as it seems and once the excitement is over the consequences have to be addressed and decisions made.

Things that were left unsaid, artfully done continuation of a character that should have been addressed in the series.

A Blade of Atlantis by Jo Graham

Atlantis rocks under the initial onslaught from the Wraith as they are softened up before the hive ships arrive which gives the expedition time to get the Ancient chair and drones working but time is of an essence and Wraith are loose in the city. Zelenka with an armed escort is making his way to the chair room via a very round about path as the transporters are down but when they are ambushed Zelenka faces death until help from a very unexpected place arrives and changes everything for Radek.

A seamless addition to what was an outstanding trilogy of episodes.

So there you go, more than enough to wet your appetite and like I said these are not long time consuming stories but snippets of time amongst the SGC and Atlantis which in some cases make use of existing gaps within the narrative to slip in and enhance the televised stories and others which standalone. Now I have my favourites and to be honest which I prefer is not that important since they all have merit, some are a little funnier than others some quite dark but for the price I don’t think any Stargate fan would feel let down by either the paperback or ebook of Far Horizons.