The Daedalus is returning to Atlantis without the ZPM so it is well into the third week and the passengers are a little bored despite the events which led to their return to Earth and renewal of their charter to continue the exploration of Atlantis and the Pegasus galaxy. A body is discovered which at first looks to have been an accidental death but things don’t add up and during the investigation another crewman dies at the hands of the ships technology. McKay discovers a Wraith sourced virus infecting the ships core systems which has the ability to adapt and survive numerous attempts to remove it,  it calls for help and denies the ship the use of it’s hyperdrive engines leaving them stuck in the middle of nowhere.

The Intruder is a good bottle type show making full use of the new Daedalus standing set which is a modification of the original Prometheus set. This isn’t a cheap show though, there is extensive CGI work use to create the space shots and combat scenes plus some top notch matt work to show us the large landing bays complete with ships and forcefields in play. We also have the lead guest star ( Mitch Pileggi ) being made full use of and Beau Bridges appearing in flashbacks so the episode was making the most of the resources available to the producers at the time. In story terms they don’t try to hide the similarity to the SG1 episode Entity and it’s discussed at length within the shows commentary track but there are enough changes to make a much better story and overall a better episodes. 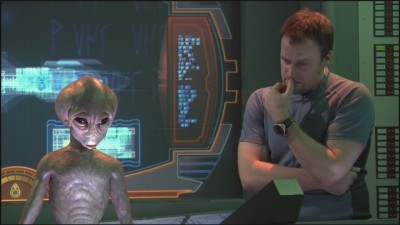 The Intruder is an episode which maintains the pacing of the second season as defined by The Siege trilogy but allows for a breather with it’s use of flashbacks all of which lays down some solid groundwork for the changes that are coming to the story. The flashbacks were also a nice addition and spell out how they affected Elizabeth both in her success job wise and the failure of her relationship, in both cases they were strong scenes for Torri. 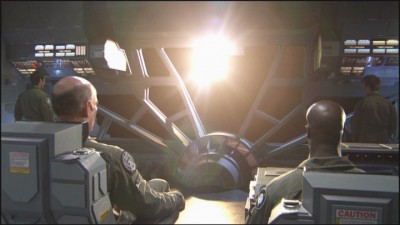 This weeks promo is from The Anomaly Podcast, an excellent show which is hosted by Angela and Jen and has it’s own supplemental show, both of which are worth checking out. Brad joined me for this weeks show as Alan was in the middle of his move to Finland and sorting out his classes and his new home, next week Brad will be back with the SG1 episode Origin. We appreciate all the activity on the media portals especially the Facebook group which is generating some good discussion and Twitter which is always fun when talking to the Stargate community.