Jack now blended with the Tokra Kanan is innjured and captured whilst attempting to escape for a system lords secret research facility. The Tokra consider Kanan and by default Jack as being lost in action but the SGC are not prepared to give up so easily and demand access to all the mission data from Kanan’s spying. Meanwhile Jack is being systematically tortured and then murdered by Baal who uses the sarcophagus to revive him and then a miracle happens. Daniel in his ascended form visits Jack to offer comfort and solace with an offer to help him ascend as that is the only direct help he can offer as the Ascended are not allowed to interfere. The search for Jack continues but time is running out, there is only so much of Jack that can survive the multiple visits to the life giving sarcophagus. 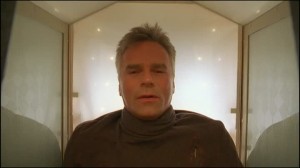 Time to wake up Jack

Abyss is a fan favourite and easily demonstrates how well Jack and Daniel have evolved their close and rewarding friendship, it’s made more evident because we have been denied this interaction after Michael Shanks left the show and as of yet Jonas’s character  is still under development. The Tok’ra back story once again highlights the divisions between the SGC and their weakening resistance against the System Lords but it’s a nice idea to have Jack’s ethics and personality drastically effect the reasoning of Kanan who probably was a very direct and decisive operative willing to sacrifice anyone regardless of any personal feelings. 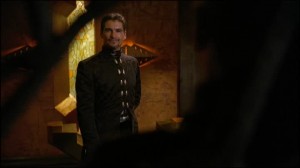 Pure evil but with style

The production of this episode is once again top notch, some clever movie making is used to create the visuals and tight writing and direction required to make the most of the intense dialogue between Jack and Daniel and Jack and Ba’al.

To put it simply Abyss is the highlight of the season so far.