A jumper is crossing the Lantean solar system en route to a mysterious object detected at the lagrange point, they discover a huge weapons platform believed to have been the last line of defence for Atlantis, it seems undamaged but obviously failed to prevent the siege of the city by the Wraith.
The sensors find a weak signal being broadcast from a nearby planet so with Weir’s permission they go and investigate and find a crashed Wraith cruiser which may have been a victim of the weapon prior to it’s shutdown. The ship is around 10,000 years old and no life signs so foolishly as it turns out Mckay, Sheppard with Doctors Abram and Gall enter the wreck and find that it’s a supply ship having stored thousands of humans intended to feed the invading Wraith fleet. Disturbingly it seems some of the bodies were Wraith and had been fed upon indicating that near the end they had turned on each other but surely no one could have survived this long? 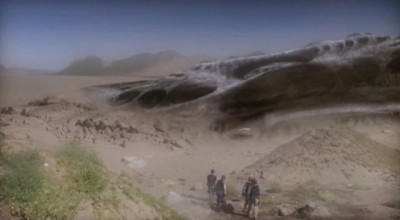 Of course we knew they did so as the team split up the two red shirts sorry scientists are attacked and the Wraith learns the whereabouts of the jumper leading to a one on one chess game between Sheppard and the sole survivor to escape from the planet. 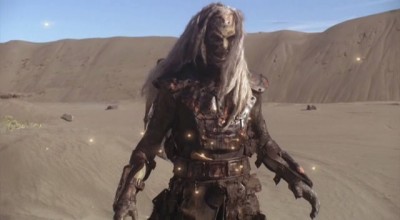 The Defiant One is a cracking episode, we get a huge piece of the season finale puzzle with the weapons platform and some very good character growth with McKay as he struggles with his in built survival traits and the desire to not let Sheppard fight alone. The two secondary characters are excellent for the story, Abrams doesn’t last long but the discussion between the aged Gall and McKay was excellent and both actors were top notch and it’s conclusion heart breaking and quite dark for Atlantis. We also got some great interaction between the Wraith and Sheppard as they each tried to out maneuver each other, excellent costuming, prosthetics and stunt work in the desert made for compelling television and a great fireball to wrap it all up.

A huge thanks once again to Brad for joining us for this episode and next week we are going to join General Hammond on board the Prometheus and be amused as a single Kull warrior nicks it, yes it’s the awesome Prometheus Unbound and Jeff will be joining us for that show. The promo this week is from our friend Nuchtchas with her Nutty Bites podcast, great geeky fun with excellent guests and discussion, have a listen and enjoy:)