The Russians are coming or at least their equivalent of a SG team after SG1 discover evidence that a previous Russian expedition (pre Watergate) had visited a world. As it turns out that team never returned and the spirit of co-operation they travel to the planet and attempt to enter the sealed pyramid (sorry Ziggurat) and reveal it’s mysteries. It comes as no surprise that the previous Russian mission came to a grizzly fate after discovering the truth behind this tomb but both SG1 and 3B1 are unprepared when they to get trapped and becoming the prey for a being millennia old with all the guile and hatred that goes with it. 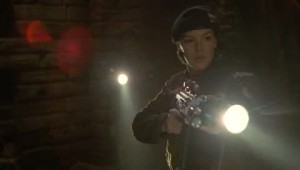 We’re on a Snipe hunt!

The Tomb obviously starts to build on the events from the episode Watergate (S4E7) and the agreement with the Russians to acquire the gate lost in the ocean and begins a fairly long semi-regular arc as the secret of the Stargate spreads outwards. This eventually becomes a major part of the series leading to the multi-national Pegasus expedition we see in SGA and the IOA, lots more to come you see:)

The Tomb has all the feel of a good scifi flick where our gallant heroes are brought crashing to their knees when faced with an opponent they should be able to handle but location, conditions and plain ignorance gives them a decidedly visiting team disadvantage. That said the episode kinda sits in the middle, not quite the uber bug hunt it could have been or the internal conflict drama that it may have been shaped to be and thus is suffers a little. It’s still a fun episode and beautifully shot and has rewatchability. 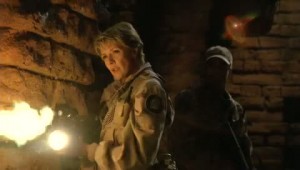