“A shooting in the heart of Stargate Command is only the beginning for Daniel Jackson and Vala Mal Doran. Suddenly it’s friend against friend, none of their allies can be relied upon and they’re the universe’s only hope to foil the latest scheme concocted by the last System Lord, Ba’al.
Will Daniel, Vala and a few of Vala’s less than savoury friends be enough to stop a conspiracy that reaches deep into the heart of Stargate Command and threatens to destroy everything they’ve spent years building?”

What more could you ask for than Michael Shanks, Claudia Black and Cliff Simon performing the only Stargate we are going to get for a while. There is a trailer on the site so have a listen and imagine a world where the TV franchise is alive and well. 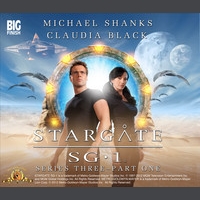