June the second is a very monumentous date for Stargate birthdays.
The darling of Firefly and more recently The LA Complex Jewel Staite celebrates her birth today, she guest starred in the Stargate Atlantis episode “Instinct” as Ellia under heavy prosthetics and then returned to the show as the cast regular Dr Jennifer Keller. 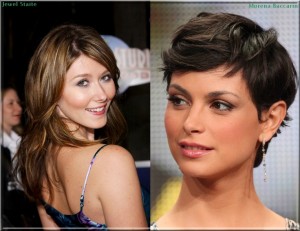 Sharing the second of June the queen of Firely and recently V and Homeland Morena Baccarin is celebrating her birthday. She had a recurring role as the nemesis of the milky way galaxy “Adria” and made an awfully big splash for only appearing in a few episodes (and Ark of Truth) but was pivotal that seasons story line.  IMDB

A great big birthday hug (don’t I wish) to the ladies of Stargate and Scifi, beautiful, talented and taking their craft to other genres with lots of success.