Roll out the red carpet for a fine collection of Stargate Birthdays on January 17th.

First up is the legend that is James Earl Jones who voiced the Unas in the Stargate SG1 episode Thor’s Hammer and of course he also voiced Darth Vadar in the Star Wars original trilogy. He also starred in Conan the Barbarian and guest starred on House, The Simpsons and oh so many more shows/movies. IMDB
Joshua Malina only appeared once in Stargate as the character Cicero in the SG1 epiosde Bad Guys, he is perhaps better known for starring in The West Wing and recently appeared in Scandel and Leap Year. IMDB
David Blue made his name as a recurring character on Ugly Betty before taking the leading role of Eli Wallace in Stargate Universe, he has also appeared in Moonlight, Dirt and Scrubs. IMDB
Neil Maffin played Merrel in the Stargate Atlantis episode Poisoning The Well and has guest starred in The Collector,Andromeda and L&O Special Victims Unit. IMDB
Last but not least Daren A. Herbert played a Captain in the Stargate Universe episode Seizure, he has guest starred in Fringe, Smallville and Human Target as well as roles in the movies This Means War and 2012. IMDB 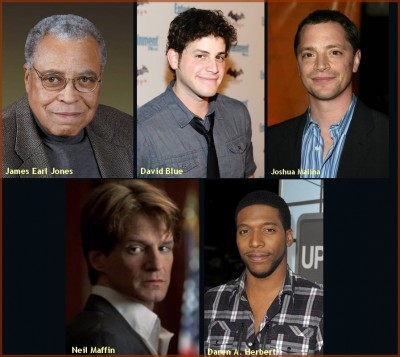