Randy Schooley
Randy played Dr Meyers on the Stargate SG1 episode The Other Guys. He has also been on Bones, Rockpoint P.D. and The Unprofessionals. IMDB 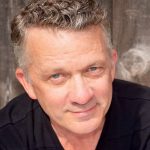