In the fifth season episode Outsider Dr Carson Beckett is running a small medical clinic amongst a community on another world, the team visit to bring medical supplies and then the Wraith turn up looking for refugees from Balar a world recently destroyed since it’s population were infected by the Hoffan drug and would kill any Wraith that fed upon them. The Wraith commander gives the village an ultimatum, identify the refugees and live or deny them and bring about the wrath of the Wraith. John attempts to get the council to take the high road but he is unable to evacuate or fight the Wraith and then local elements start to herd the refugees and hand them over. One of the refugees offers information to the Wraith commander in return for freedom, he points out Carson as being an expert on the Hoffan plague and the Wraith capture Carson and Rodney and then kill the informant, there is no survival option for those infected at least from the point of view of the Wraith. John and the team continue to rally support in the village and eventually use guile and deceit to get what they want, the Wraith are killed and they fight their way to the gate only to be met by Rodney and Carson who have themselves used their intelligence to escape from the Wraith ship. The survivors of the world along with the refugees are taken to Atlantis and then relocated on another world hopefully well away from Wraith interest but once again the fallout from the biological defence/offence against the Wraith continues to have serious consequences. 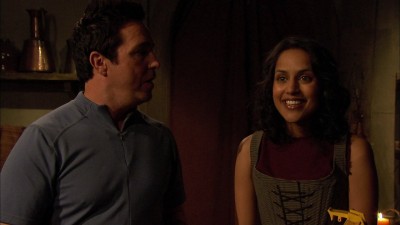 Outsiders is not my favorite episode of the fifth season, it is however very well produced and the set/props departments excelled at making the standing village set look very different from what we’ve seen before. There were very good performances from Joel Polis and Sean Tyson which helped to raise the episode but it lacks any real impact on the major events of this final season of Atlantis. This weeks podcast promo is for The Saturday B Movie Reel and next week we are going to take a look at the episode Inquisition and let us know what you think, we’d love to hear your thoughts on the episodes of Stargate and of our own coverage.