In First Contact the mid-season finale of the final season of Stargate Atlantis the city is visited by Daniel Jackson. He is convinced that the ancient named Janus had a secret lab within the city, together he and Rodney discover it and it’s treasure trove of technology. One device begins to emit a signal which is picked up by a piece of ancient technology overseen by an unidentified alien species who then raid Atlantis stealing technology and kidnapping Daniel and Rodney. Meanwhile a diplomatic party onboard the Daedalus have met with a Todd and a small fleet of Wraith and discussions are ongoing to the use of the new retrovirus. The aliens holding the boys threaten their lives if they do not activate the ancient technology which Rodney has been able to identify as a means to negate hyperspace drives based on their specific energy signatures. Turning the systems on would mean the Wraith ships would be limited to sublight but a previous test over ten thousand years ago indicated a serious side effect which was probably responsible for the system not being deployed during the war. Rodney turns the machine on and two Wraith cruisers vaporise as they enter hyperspace, Todd recognises the technology being used and incapacitates the crew of the Deadalus and takes over the ship. It’s only later that Rodney discovers the side effect of the device, while it prevents the use of hyperspace it also causes a power build up in any Stargate attempting to access wormholes and Atlantis unaware of the threat begins to dial out. Radek sees the energy build up but can not prevent it so he wraps the gate in the cities shield but it can not dissipate the energy from the destroyed Stargate and a minimal amount breaches causing serious damage to the gate room and the tower. 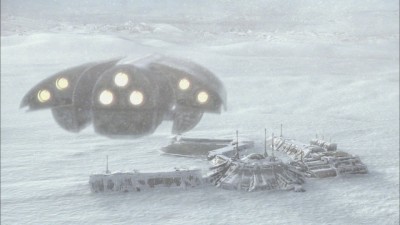 First Contact is geared up to provide a cliffhanger for the break over the holidays and more importantly introduce a highly advanced species from within Pegasus, the existence of such has been referred to by a number of space faring races and like the Asurans before them remained in the shadows. Of course at this point the Atlanteans are unaware of who they are dealing with and the technology presented offers no clue apart from being able to sidestep much of Ancient technology from ten thousand years ago. Interesting to note the Wraith who have continued to develop their sciences have found solutions to many of the threats offered by the Ancients which indicates this new race have not kept pace, the question is why.

First Contact even judged as a single episode is excellent, we have Daniel making it back to Atlantis again and of course things go wrong, Rodney is all upset as he sees Daniel as a rival more so than many others and we get award winning CGI/VFX in the episode, the sequence in the gateroom as the stargate is destroyed was truly gorgeous. I think it’s safe to say we were all on tenterhooks awaiting the second half of this story and in 2016 that means recording our take on it the same night as this episode and releasing the finished podcast a week later. This weeks podcast promo is for the Scifi Movie Podcast and next week we are going to be discussing The Lost Tribe and Thomas will be with us once again.

Thanks to Mack and Levi for the feedback and feel free to let us know what you think of Stargate and our coverage of the episodes:)