Rodney awakes and finds himself tied to a chair in his lab with no memory of how he got there or come to think of it who he is. In front of him is his tablet with a big label attached saying Press Here, he does and he sees himself and the recording begins to explain the situation and one objective, find this woman known as Teyla. Credits role and we when we return we see Atlantis a few hours before as Rodney greets Katie Brown in her lab, she has just returned from an expedition and returns with some samples including a rather suggestive cactus which she intends to name after Rodney.  Katie is feeling a little under the weather so he takes her down to the infirmary where a number of other members of the expedition are reporting medical issues and Dr. Keller discovers that a virus has entered Atlantis. 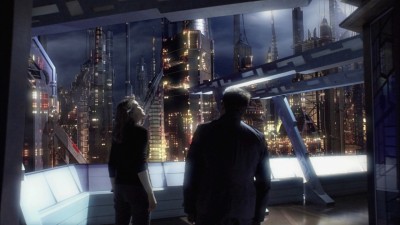 The episode continues to flip between the past and present as the virus begins to take hold and the infected begin to lose their memories while in the present soldiers taking stimulants are rounding up the science and operations staff and taking them to a makeshift medical facility in the cafeteria which is big enough to contain the infected. Eventually it’s discovered that only Teyla and Ronon are unaffected and they both try to make the best of the situation, Teyla attempts to find Zelenka who has hidden the control crystal for the gate and Ronon along with John has taken a jumper to the mainland to source a plant that will provide the cure to the infection which turned to be a common ailment within Pegasus.

Tabula Rasa is a very interesting looking episode, the two time frames are distinguished by the over blown look of the present perhaps to indicate how the people are seeing the city while under the influence of the infection and of course they were not shy using the plant mister to give everyone a very clammy look which worked very well. It was also a clever idea to explain how the situation got as bad as it did with sensible decisions being made all of which proved in the short term to be counter productive, it was ultimately a rabbit out of the hat that saved the day and the city was looking to have so few casualties. I personally enjoyed the episode, the style of the production was a highlight and the acting from the regular cast most of who were allowed to twist their characters just a little to reflect the infection as it took hold. Overall an entertaining episode of Atlantis and pretty much standalone although it was good to have Katie back, always fun to see Rodney tip toeing in the minefield of romance:)

I recently read the uber fan-fiction novel Stargate Aschen by Kimberley Jackson, there is a short review of the novel in this episode.

Thank you to everyone that has been listening as the summer takes hold in the northern hemisphere, we know everyone wants to enjoy the good weather and do other things so we appreciate everyone that is taking the time to listen to the show. Of course our continued thanks go to those who join us for an episode and in this case it was a welcome back to Jeff who as a teacher has some time off during the summer months, he will be returning for another episode shortly. This weeks podcast promo was for The Rusted Robot and next week we are going to be taking a look at the episode Missing which has a very familiar face guest starring as the bad guy or one of them anyway, hope you join us for that and please let us know what you think of the show, would love to get some feedback via email, facebook and google+ and the ever bountiful twitter.