Daniel discovers the potential location of yet another cache of Ancient artifacts which may or may not include weapons technology, they gate to the location and find themselves in what appears to be a large modern museum which is currently hosting some sort of gala event, they are discovered and in the confusion shots are fired and alarms triggered which seals SG1 and some of the locals inside the structure. Alas to complicate matters the DHD is just a show piece and SG1 have to handle the “hostage” situation without hurting anymore (more than necessary) until such time as the SGC makes contact or they themselves discover a way to power the gate and manually dial out. A lone security guard takes it upon himself to take on and defeat these “rebels” while a museum researcher is vindicated in his belief that the ring device was indeed a means of travel amongst the stars but meanwhile the clock is ticking and this society which seems to be in the midst of political and social struggle have their fingers on the trigger. 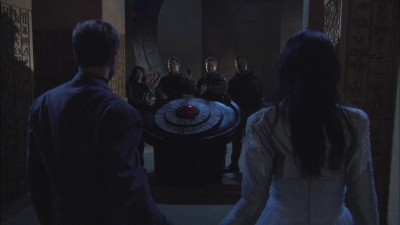 We come in peace

Bad Guys is another episode that doesn’t quite seem to fit into the headlong dash to the conclusion of the ORI storyline and the wrapping up of the final season of the show, it has the feel of a mid-series episode with some decent action, humour and a few very worthy guest stars. The episode didn’t get a great reception either and Michael was quite critical of his characters actions in the episode but as we found out some heavy editing took place which may have made a significant difference to the overall context of various scenes. Ron Canada, Joshua Malina and Alistair Abell all bring their A game to the episode and make all the difference to what is a rather forgettable episode more so given the high standards of the final season.

We’d like to thank Andrew for joining us for the first time on this episode, he was well into the episode and made it far more enjoyable that it would have been otherwise, hopefully he will be back sooner rather than later and if you have the time check out his music, link below.

Thank you to Brad and Andrew for the feedback over on our Facebook page and everyone who has listened to this episode and supported the show. This weeks promo is for the Anomaly Podcast and next week we return to Atlantis for the episode The Ark, just me and Alan for that one but we hope you join us 🙂