After a wonderful insight and some Daniel detective work SG1 are away to discover the location of Merlin’s weapon the Sangraal. They arrive at a village and are greeted by the locals who aware of the quest, SG1 are not the first to undertake it but it seems not long before Ba’al had passed through, maybe they are too late. During some research the ORI invade and SG1 are forced to fight and then flee with the local librarian and head towards the lonely mountain and the dragon that protects the Sangraal, fun and games commence. 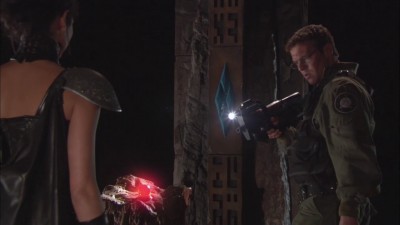 Well here we are at the first part of a mid-season two parter, the quest for the weapon is nearing conclusion with not only Ba’al sniffing around but the ORI hot on their heels, lets not forget the dragon of lore which is said to protect the treasures left by Merlin but alas the visual effects artists were not firing on all cylinders or maybe the budget was simply stretched too tight just this once. To eb fair it may be the case that the representation of Dragons in particular has come a long way in the last few years but this is perhaps this dragon was expected to deliver and ultimately failed, better in the second part of the episode but in part 1 just a spindly legged lizard. Of course lots more to praise in the episode, Rod Loomis as Osric was exceptional and having Ba’al and Adria on screen at the same time with what  amounted to pretty much bickering foreplay was a riot to watch and we also get classic puzzle solving Daniel. As a mid-season finale The Quest Part 1 works very well, maybe a little slow in places but the puzzle solving works well within the story and the character interaction is the icing on the episode and who didn’t smile as Vala pulled the hair dryer out of her backpack, a little trite perhaps but funny.

Thomas joined us for this episode and will also be with us for part two which is going to be released next week, then we are going to do some bonus episodes and return with new Stargate specific episodes in January with The Return Part 1 and Miles will be a guest on that show which I am planning to present as a feature length show. Many thanks for the comments from Mack over on Google + for Phantoms and the ongoing chat on twitter and facebook. This weeks promo is for The Sci-Fi Movie Podcast a very entertaining look at some of the recent and not so recent scifi movies, well worth having a listen too as they cover movies from all across the genre and as always we’d love to hear from you and as a bonus a review/rating over on itunes or Stitcher would be really appreciated but for now keep enjoying Stargate, it binds us all together:)