Vala volunteers to travel with the rest of well sorta SG1 to a world that has been visited by a Prior, it turns out that she stayed on this world disguised as Qetesh. No one should really be surprised that her real motive was to reclaim a bunch of treasure she had acquired but Daniel is convinced that only the truth of the false gods is capable of combating the threat of the Ori who themselves are false gods. Of course after learning the truth the people immediately imprison Vala for crimes against them and while Daniel is defending her the Prior arrives and makes his position very clear. After he leaves the people start to fall ill and nothing Dr Lam and her team can do can cure the disease, even the healing device is only a temporary measure and when it push to comes the natives of the world bow down to the Ori and the Prior cures them all. Just before he turns to leave he stares at Daniel and tells him to relay this story to anyone that will listen and then walks away. 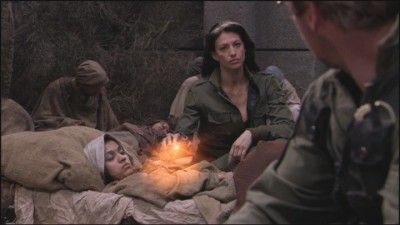 The Powers That Be is a very strong episode and really nails down what the Ori and their Priors are capable of doing along with the propaganda use of their actions both positive and negative. As with the Gou’ald the SGC and Earth are once again faced with very powerful beings but until the System Lords the Ori powers are at a level that does seem to be a step away from technology based thus enforcing the belief they have god like powers or are indeed gods themselves. It doesn’t hurt that the Priors for the time are preaching only the positive and backing it up, any opposition has a very difficult time to hold up examples of the Ori’s deceit or complicity and words are just words. 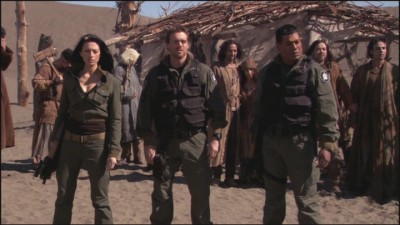 Get used to losing guys!

It was very interesting to see the former Administrator turned Prior arrive in the Milky Way, it was bad enough random Priors were appearing but his appearance had to be response to Daniel being on the planet, it certainly underlines how manipulative the Ori are at least until force is required to quell the dissenters. Greg Anderson who plays the Prior does a wonderful job with the writing his is given, by keeping some level of humanity (not seen in the other Priors) he is all the more threatening and competent. The use of the disease/plague is also a call back to the ultimate demise of the non-ascended ancients, you wonder if before they fled their home galaxy their conflict with who would become the Ori left a little seed which generations later removed them from the physical plane. This episode does a great job of opening avenues for the story to travel down.

Thanks for everyone who has been posting and using the Facebook, Twitter and G+ sites as well as regularly visiting this main website, it’s rewarding to see people making use of our efforts and the feedback we get is great. In that regard we got some discussion about Duet over on Facebook and continued chatter on Twitter about pretty much everything Stargate. This weeks promo is for the new Dune podcast which will be covering the entire literature aspect of the franchise on a monthly basis, the show hosts included Scott from the Scifi Diner podcast so you may be familiar with his voice:)

This was our 200th episode and it includes the results of the recent competition, they will be published on the site and other portals when everyone has been notified but we want to thank everyone for entering, at best there is a prize at worst you got to puzzle over four Stargate themed questions:)

Brad once again got up early and recorded with us, we had a lot of skype issues but we stood firm and got the episode recorded. We are still looking for more guests to come on the show, the schedule is rather sparse for the next few months so if you fancy joining us for an episode (SG1 or SGA) then get in touch and we’ll sort something out but until then take care everyone and don’t forget where you left the gate.