The second season of Stargate Atlantis kicks off with the arrival of the Daedalus just in time to rescue John from his suicide run on a Wraith Hive ship, the nuke detonates and removes the hive from orbit and then the Daedalus zeroes in on the second hive and once that is destroyed the cruisers make a run for it but the Darts make a beeline for the city. McKay with the ZPM struggles to power up the city shields as the darts get closer and yep he saves the day. Colonel Caldwell says hello and Ford is found in the water with a dead Wraith attached to his chest, it seems the venom used to prolong a victims life for feeding kept him alive but there have been consequences.

Long range sensors detect another twelve hive ships heading for the planet and John convinces Weir and Caldwell that with the tactical advantage of the nukes and beaming technology thanks to the Asgard and more importantly Hermiod the fight should be taken to the Wraith. The Daedalus lies in wait and as the Wraith fleet emerges from hyperspace, two hives are nuked but the others respond with new countermeasures forcing the Daedalus to retreat and once again the city has to defend itself. The remaining ten hives take position in orbit above Atlantis and open up with their main weapons, the shield protects the city but with only one ZPM it will not last long and a crazy idea is formulated. 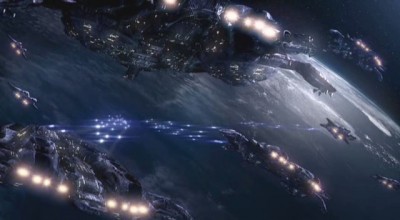 Rodney and Radak remove a cloaking system from a jumper and splice it into the cities systems and with Teyla broadcasting the intent to destroy the city to protect Earth a nuke is detonated, the shields protects the city from the initial blast (which also disrupts sensors) and then the cloak is engaged to make it appear as if the city has been destroyed. The Wraith scan the planet but can not find any sign of the city and begin to move away but Ford now changed by the venom in his system raids the infirmary, threatens Carson and John before stealing a jumper and fleeing the city.

Phew, The Siege Part 3 for an episode that isn’t as big on action as the season one finale certainly packed in a lot of story and character elements and not only wraps up existing story lines but begins to lay down those that will work their way through the second season and beyond. There was a very good moment between John and Landey, respect shown by both men and resolves any doubts over John’s decision to put Colonel Sumner out of his misery which always hung over his command, it pays off in the next episode and as the character grows.

The CGI in this episode is stunning more so because three separate groups were responsible including the newly minted inhouse group who will be taking over much of the very expensive effects work any self respecting scifi show requires to make it shine. It was also great to see Hermiod back again in full puppet mode  which really allows for good interaction with the actors and one or two fun moments, an irritable Asgard is fun:) 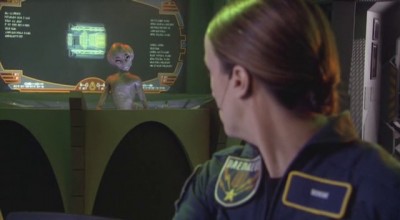 What did he say?

All in all the season opener was a great start to the second year of Atlantis, the show is moving on and now both Carson and Radak will grow as characters, Ford is taking a step backwards but will return and exploration free of the immediate Wraith threat will allow for stories that couldn’t be told at the close of the first season.

Thanks to everyone who posted via twitter, facebook and google+ and we would sure like to hear from anyone with comments on our show and Stargate in general. This weeks promo is from Colin’s Trek News & Views podcast and next week we are back with Avalon Part 2, hope you can join us.