The discovery of an artifical dome close to the stargate on a poisioned world leads SG1 to investigate using their state of the art containment suits which are obviously not air tight. Small issues like that are not important as a small community is found living a tranquil existence but reliant on an uber computer system networked into their very minds. All seems well until Sam discovers issues with the power systems and people start vanishing yet those left behind do not question and even forget these people even existed.
Faced with the ultimate destruction of the remnants of this civilisation SG1 have to decide if they have the right to intervene or step aside and let things play out. 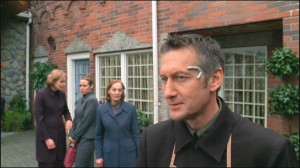 Revisions is a nice standalone episode which features for the most part all of the main cast members, that said Daniel and Sam have more screentime but it is a scientific leaning mission leaving Jack and Teal’c to get into mishief.
The technology in play is highly advanced and you wonder like with our world how such brilliance would be unable to bring forth solutions to this worlds power generation and consumption/waste issues. Ultimately the final solution to save as many people as
practical was a fine idea but it stagnated the culture leaving no opportunity for a long term global solution. Then again maybe the networking of the computer into the minds of the people is the underlying lesson to be learned rather than the folly of a culture
bringing about it’s own destruction. 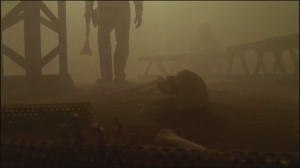 One huge bonus of Revisions is the guest role for Christopher Heyerdahl who does make quite a few guest spots and two significant recurring roles in the franchise, he also made his mark in Sanctuary (two roles again) and the recent AMC series Hell On Wheels.

The promo for this week is from Tuning Into SciFi TV and next week we will be covering the fifth episode in this season “Lifeboat”.